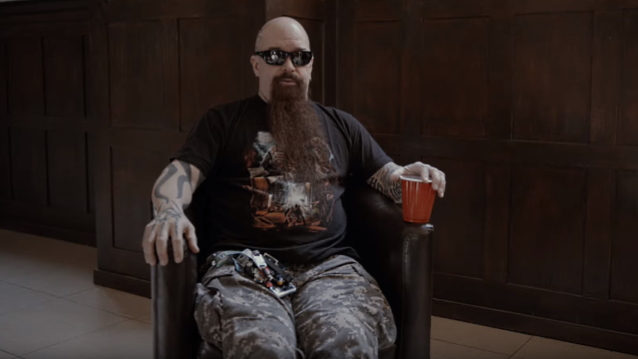 KERRY KING: SLAYER Stays 'Edgy' By Making Songs About Things 'Other Bands Are Scared To Write About'

He states: "I think, by being able to make songs about things maybe other bands are scared to write about. It keeps us edgy.

"I've said it a million times — I enjoy being the bad guy. But it's more than that — it's being able to say things the kids are feeling, and no one else is saying it. So I think that's one of the things that makes SLAYER close to the fanbase.

"So many times, when we do meet-and-greets, people break down. And it's, like, 'Jesus Christ, man! I just play guitar. What the hell?' But, to them, it's way more than that — way more than that. So, as the fans say, it's SLAYER."

"Slayer: The Repentless Killogy" is coming to theaters worldwide for a one-night-only event on November 6. The film was written and directed by BJ McDonnell, who conceived and directed the three brutal music videos — "You Against You", "Repentless" and "Pride In Prejudice" — for SLAYER's final studio album, "Repentless" (2015).

"The Repentless Trilogy" motion picture opens with the three music videos assembled as one chronological storyline and introduces the narrative's main character, Wyatt, a former Neo Nazi associated with a gang known as "The Hand Brotherhood," whose signature mark was a bloody handprint left after a murder had taken place.