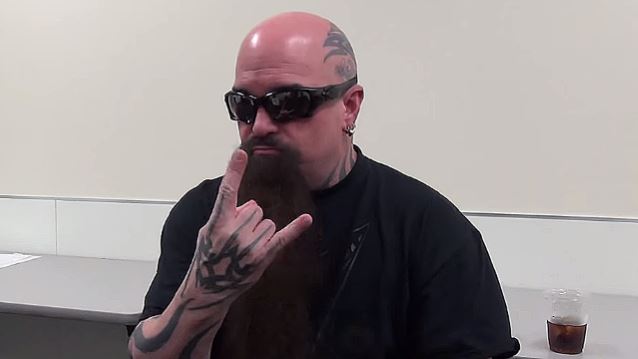 SLAYER guitarist Kerry King was recently interviewed by Danish radio station P6 Beat. You can now listen to the chat in the YouTube clip below. A few excerpts follow (transcribed by BLABBERMOUTH.NET).

On whether there are ever any instances when SLAYER bassist/vocalist Tom Araya, who is Catholic, has been reluctant to sing any of the band's lyrics due to SLAYER's anti-religion aesthetic:

Kerry: "It's really funny, because Tom, historically, really wouldn't talk to me about that. It would usually be a conversation between him and [late SLAYER guitarist] Jeff [Hanneman]. [Laughs] I don't know why. But, yeah, you know, I always thought I would get to a point and just say something so offensive that that situation might happen, and it hasn't yet. I think he realizes SLAYER is entertaining, it's entertainment, and I think that's how Tom rationalizes his participation. Whether I believe it or not, it's not his feelings. And he says that in… I think that's how he gets by. In his interviews, he says his beliefs are his beliefs. But SLAYER, since the early days, came about being a band that sings about taboo type of things, horror-movie references, anti-religious references… That's the kind of… That's what SLAYER is, and to do anything different now would just make every fan we've ever had hate us. [Laughs] And I like it. I like horror movies, and I like just darker topics."

On whether there has been a specific instance where SLAYER has changed any of its lyrics due to its graphic content:

Kerry: "No. The only time that ever happened, and it happened on this record ['Repentless']…. You know, we put out 'Atrocity Vendor' as a B-side on some single, and I wanted to be part of the collection that this record is, even though people had access to [the original version]. And in doing so, we re-recorded it from the bottom up. Paul [Bostaph] was doing the drums, I re-recorded every guitar and changed the… not the arrangement, but how the drums sit in it. And I took the opportunity to make the lyrics better. 'Cause when I wrote it the first time, I got to the third verse and I said, 'The song is called 'Atrocity Vendor' and I haven't written anything atrocious yet.' So that's when I wrote the line, something, something, 'fistfuck you with your own severed arm.' And in hindsight, I went, 'That's a little too 'grandstandy' for SLAYER.' It sounds like something another band would have did. So I fixed it, in my mind; I made it better. [A band like] CANNIBAL CORPSE [could have written a lyric like that], for sure. And that's not saying anything bad about CANNIBAL CORPSE. To me, it was too over the top for SLAYER, if that makes sense."

On whether he was surprised by the strong media reaction to the SLAYER song "Jihad":

Kerry: "Maybe a little bit. To me, it's bordering on the craziness of the 'Angel Of Death', when it came out — so much so that the record label decided they didn't wanna put it out. So we had this great record that our record label refused to put out. Looking back now, I wonder what they think. You know, what people call the quintessential thrash album. I wonder what that company thinks now. They probably don't give a shit. [Laughs]"

On why he thinks heavy metal's major source for its imagery and rhetoric of chaos is religion:

Kerry: "My guess is just 'cause metal's always been… I mean, take a band like JUDAS PRIEST; they don't do it, that I'm aware of. But BLACK SABBATH — absolutely. And it becomes… For me, and I assume in a BLACK SABBATH type of band, it becomes, 'How do I outdo what I've already done?' to an extent. One of the hardest times in my life was after 'God Hates Us All' came out, because that's such a strong statement. I'm, like, 'How do I beat that?' I just said it all. And it took me a long time to get the next record, to find topics. I'm, like, 'All right. This is strong enough.' But I think, for me, it deals with that horror background. If we're going to a horror movie, generally it's about some sort of possession or some serial killer. That's what I'm into, and, I think, as a genre, a lot of metal composers are into that as well."

On whether he would like to see SLAYER come to an end at some "appropriate" time or "die with his boots on," as seems to be the attitude of a band like MOTÖRHEAD, which continues to tour despite major health issues:

Kerry: "I'm cool with either one, really. But there's a physicality in what we do that's never been MOTÖRHEAD. MOTÖRHEAD's never been a physical… When you see 'em, they play their instruments and they're awesome. That's what you've gotten since Day One. Ours has been more of an event. There's stuff going on. We're still fifty and headbanging pretty decently for a dude my age, and I think that's part of the event. Now, Tom, he had the neck surgery and he doesn't headbang anymore. We've picked up the slack. Me and Gary [Holt, guitar] put on a show. Paul puts on a show. Tom has actually gotten better at singing and playing bass since he's not throwing his head every which direction. So I think at a time if we couldn't put on a show, I hope that I'm smart enough to say, 'Let's leave our… Let's do a farewell tour right now and chop it,' and don't give anybody that view of seeing you in a way that you shouldn't be seen or they're not to seeing you."