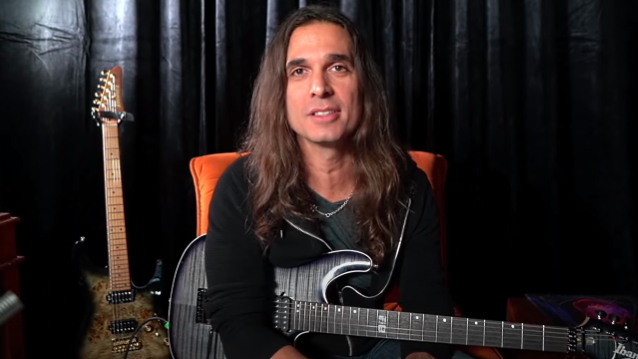 In April 2015, it was announced that Brazilian guitarist Kiko Loureiro had joined MEGADETH, replacing Chris Broderick, who had left the band five months earlier. Loureiro has now released the final video he sent to David Ellefson and Dave Mustaine five and a half years ago of him performing the song "Symphony Of Destruction" as a way of showcasing his skills.

This past April, Kiko posted videos of him performing the songs "Hangar 18", "Trust" and "Holy Wars", and he revealed the story behind his audition for MEGADETH. Introducing the clips, Kiko said: "This is not a 'How To Play A Megadeth Song' video. So don't try to learn how to play this song from this video. There's a lot of wrong notes, a lot of wrong riffs. But there's a story behind this video. So let me tell you.

"In 2015, I got a call from Dave Ellefson and Dave Mustaine to do the audition for MEGADETH. And the management bought me a ticket on Monday to go to Nashville to meet Dave Mustaine and then actually to do the audition. But then I offered, 'So do you guys want me to film me playing from home so I can send you a video playing a few songs?' And they said, 'Yes.' So I had a Saturday and a Sunday to learn a few songs and shoot the video. So on Saturday I learned 'Symphony Of Destruction', 'Hangar 18', 'Trust' and 'Holy Wars'. I tried to learn as fast as I could, memorize the structure of the songs, the riffs and the solos. So that's why there's a lot of mistakes there. And then I filmed on Sunday the four songs. I found some backing tracks on YouTube, put my camera, little amp and played. So I didn't fix any notes, I didn't try to edit or do anything — just the real Kiko trying to play the four songs in two days. My idea was not to show that I could play a hundred percent note for note, but the idea was to show that I had the technique, I had the style and I would be able to play the MEGADETH songs, of course, if I would have more time to learn all the notes. So I sent to the management, to Ellefson, to Dave Mustaine. Dave Mustaine answered, like, 'Okay, there's a lot of wrong notes.' [Laughs] Then, on Monday, I flew to Nashville, and then here I am."

Kiko, who was previously a member of the Brazilian metal band ANGRA, continued: "A lot of people were asking me about those videos, but I didn't know where they were. So now, finally, I had the time to go through my hard disks and I found them. And please enjoy, but don't try to learn the way I'm playing here, because it's not correct. I did other videos on my YouTube channel showing how to play those songs, and you also can find a lot of tutorials, much better tutorials on the Internet from other players, and also the live gigs, the live shows, you can see me playing probably not a hundred percent but much better than this video. But I think it's good to watch what I did."

In an October 2015 interview with The Irish Sun, Mustaine was full of praise for Loureiro, saying: "A lot of times guitarists won't know how to add to something — they'll put something in there that's kind of like tits on a bull, unnecessary. Kiko came in and immediately started making some really good suggestions that we applied [to MEGADETH's 2016 album, 'Dystopia']. When he first came in, I knew he had the ability but I didn't know if the songwriting technique and talent was going to show up this early on."