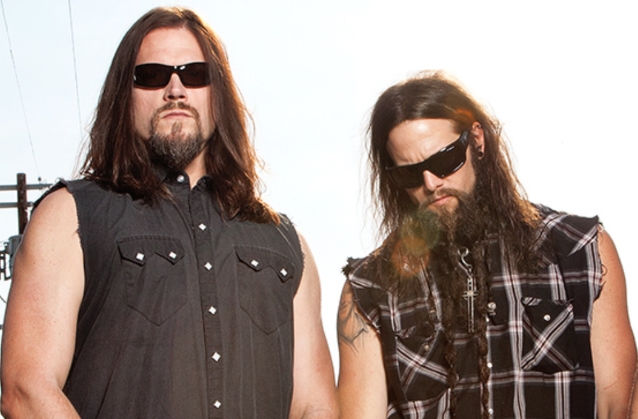 KILL DEVIL HILL has finished demoing more than an album's worth of material for the band's long-awaited follow-up to 2013's "Revolution Rise". "Dewey [Bragg, vocals] and I have been writing pretty much this whole time," guitarist Mark Zavon told 90.3 WMSC FM's "The Metal Teddy Bear Experience" in a new interview (hear audio below). "We've got a record written and demoed, so about 15, 16 songs, I guess. And we're just looking for the right home for it. We got pretty close with a couple of labels, but it's not quite the right fit. So, as soon as we find the right fit, we're gonna start tracking it. We need to go in a studio and track it all properly and everything. Right now, it's just song, the ideas for the songs, and they're recorded and they sound great, but we need to go in and actually track 'em with a producer and in a proper studio and do it for real. Hopefully it will be soon — I sure hope it'll be this year. But fingers crossed — the sooner the better for me."

He continued: "I love that stuff. And I know that the fans, they've been hitting me up online quite a bit. There's a lot of people who wanna hear it. Anybody who's a fan of the first two records is gonna love the material for the third record. So, I can't wait for fans to hear it.

Asked if the absence of bassist Rex Brown (PANTERA),who played on the first two KILL DEVIL HILL albums, has had a significant impact on the writing process for the upcoming LP, Mark said: "Rex didn't really write much for KILL DEVIL HILL. He's a great bass player. I miss that. I miss hanging out with him too — he's a good friend, he's a really great guy, and he's a really great bass player. I mean, truthfully, an amazing bass player. But it is what it is at the end of the day. And as far as writing is concerned, between Dewey and I, we wrote basically all the stuff. So that part isn't missing so much; it's the bass playing. I'll be honest with you: when I'm doing the demos, I literally think to myself, when I start playing the bass for the demos, I'm, like, 'What would Rex do?' In my mind, I wanna try and play it like Rex would play it."

About a year ago, Zavon confirmed that KILL DEVIL HILL had recruited Nico D'Arnese to play bass following the departure of Brown.

Rex spoke about his exit from KILL DEVIL HILL during a 2019 interview with Loudwire.

"They are some of my best friends in the world," he said. "I just felt like I was keeping a damper on them, so might as well take care of this thing now. It's a very amicable split and everybody's happy with the whole deal. It probably should have happened a year ago, but you never know. You've just got to keep things open. But I'm doing my thing and they're doing theirs and it's all cool."

He added: "I called the guys. I didn't want to write an e-mail. I called them individually and just reached out and said, 'Do what you need to do and I'm sorry if I held you up in any way or form,' and they were kind of cheered to know that that was the news that I wanted to do. They wanted to get out and play.

"We're still close, close friends, but it's just if they're being booked, I don't want people to think that I'm going to be there, 'cause I'm not. That's the one thing I want to get across. Yes, it's an amicable split, but it's not that big of news. I think people saw the writing on the wall, and maybe if they couldn't, they will now."

"Revolution Rise" was released in October 2013 via Century Media Records.