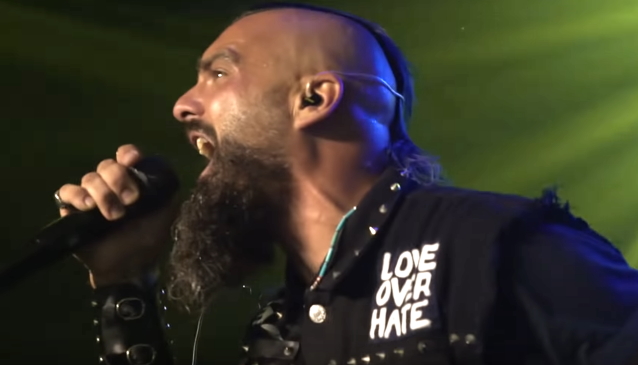 During a recent appearance on "Vox&Hops", the podcast hosted by Matt McGachy, frontman of extreme metal band CRYPTOPSY, KILLSWITCH ENGAGE singer Jesse Leach reflected on the experience of undergoing surgery in April 2018 at Mount Sinai Hospital in New York to remove polyps from his vocal cords. Speaking about how he found out the needed to have an operation in the first place, Jesse said (see video below): "We just played a sold-out show [in Los Angeles], and the crowd was incredible. And when your adrenaline's going, you tend to push, and you've gotta be really careful, whether you're a drummer or a vocalist, especially, that push can be really fucking dangerous. And I was pushing — I was feeling it. I was, like, 'This is fucking awesome.' I got off stage, and I immediately went in the bathroom, and I was, like, "Something's not right.' I felt something off. And it wasn't the usual, 'Oh, I'm fatigued.' And I hocked a loogie, and it was blood-red. And then as I'm in there, they're, like, 'Are you all right?' I'm, like, 'Yeah, yeah. I'm fine.' And then I hocked a dark loogie — so it was internal bleeding. I was not okay. But I carried such guilt from quitting KILLSWITCH in 2002 and then rejoining in 2012, the last thing in the world I wanted to do was cancel shows and be a burden. So I just rode it out and I didn't talk for the next day, next two days, and the blood didn't show up."

He continued: "We ended the tour, [then went on] the next tour. Every once in a while, this blood would just come up, and I'd pretend like I couldn't see it, or I would just drink tequila and numb it, and be, like, 'We'll get through this. We'll get through this.' On my days off, I didn't talk to anyone. I was just hyper, hyper resting, thinking that I could compensate. And then, yeah, it just got to the point where we were in the studio, and I was singing a line from one of the songs on [KILLSWITCH ENGAGE's latest album] 'Atonement', and Adam [Dutkiewicz], our [guitarist and] producer, was, like, 'Dude, you can hit this note. I've heard you hit this note thousands of times. You're not hitting it. You're flat, you're sharp, you're flat. We've been at this for a half hour. This is ridiculous. Something's wrong.' And that led me to fly home from San Diego, cancel the rest of the [studio] sessions, and go to my doctor. I had been going to this [doctor] religiously for five or six years, and he's, like, 'You've gotta be careful.' And he would put me on prednisone, and fix me up, and I would be good, and I would go off on another tour, and I'd damage it. So it was coming — I knew in the back of my mind it was coming. And he looked at me, and he was, like, 'I've never seen you this bad. This is bad. I wanna put you on vocal rest.' So pretty I was on vocal rest for about three months in total. And I couldn't speak to anyone. When they [saw] that it wasn't healing after a few weeks, they referred me to a surgeon. And he looked at my voice, and he was, like, 'You voice looks to me like an 80-year-old's neck skin when they crouch down. It's bad.' He was, like, 'I can't even guarantee you that you're gonna be able to continue doing what you do. It's that bad.' He was, like, 'We can do the surgery, but I can't guarantee you're gonna be able to do what you do anymore. And I recommend you don't do what you do anymore, if you continue all this shit.'"

According to Jesse, working with vocal coach Melissa Cross to learn how to speak and sing differently made all the difference in the world by the time he returned to the stage several weeks later.

"When the voice came back finally, I said my first word, and I started my rehabilitation after the surgery, it was, like, 'This is fucking amazing. I can still do this,'" he recalled. "And that first show back was in Talinn, Estonia opening up for IRON MAIDEN in front of 11,000 people, and I did vibrato for the first time in my career, and I started hitting notes. And I remember Adam, who is one of the guys that complain all the time, was, like, 'Dude, you did vibrato. Dude, you did good. Holy shit! You were hitting these notes that you don't really hit. You weren't sharp; you weren't flat. Wow!' So that was it. And the rest of that IRON MAIDEN tour, I was on top of the fucking world, man."