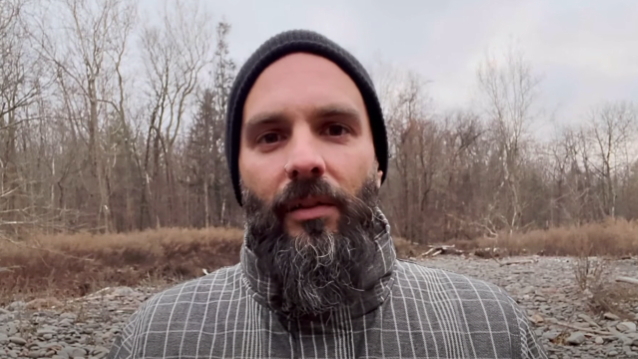 KILLSWITCH ENGAGE's JESSE LEACH: 'We Need To Engage In Dialogue And Civil Discussion To Learn Anything From Each Other'

KILLSWITCH ENGAGE frontman Jesse Leach has implored his social media followers to engage in civil discourse about sometimes divisive issues, saying we "have much to learn from one another even if we do feel a stark disagreement with another."

The 43-year-old singer, who has been open about his battles with anxiety and depression, took to his Instagram on Thursday (December 30) to share a short clip from an earlier Instagram Live video he made, and he included the following message: "I thought this particular part was worth a share if nothing else then to shed some light on why I am not screaming and preaching my (ever changing) opinions (be it political or about this virus) all over social media.

"This is one of those moments that I did not plan or think through. I was simply answering a comment on the live feed. I then rewatched it and thought perhaps this will inspire someone to seek wisdom and understanding (over self righteousness and berating someone else for different perspectives, opinions or beliefs). I may be way off but so be it.

"I am certain there are some diehard unwavering people who will take issue with my thoughts, I digress and welcome their differences," he continued.

"Perhaps I am a hopeless optimist or in truth I just desire a better world for us all to find a place to belong and find some harmony. I know this is idealistic but it is at the core of who I am regardless of your opinion on my way of thinking.

"We all are on a path of decisions and evolving mind-states. We need to engage in dialogue and civil discussion to learn anything from each other. We also all know that really isn't happening, as we are in extremely divisive and desperate times. We do have much to learn from one another even if we do feel a stark disagreement with another. I speak from experience.

"In life there are those of us who lead the charge, those of us who cower and hide and those of us who observe and contemplate in the hopes to bring balance to the push and pull of humanity," Jesse added. "I identify with the latter and consider myself a mediator and philosopher.

"Everyone plays a role and has a calling and a strength. Sometimes it's not what you say but what you don't say that can carry a great deal of weight. That and the way something is said as opposed to or in conjunction with the content of what is being said.

"We have a long way in various levels to go to navigate out of the current crisis we find ourselves in. Many of us will have PTSD for years to come especially our children.

"I do hope some day soon we begin that climb up from the depths to a higher plane of consciousness and understanding with one another.

"Until then choose your weapon be it strength, self control, hope, vigilance, love, wisdom, gentle persuasion or conviction.

"Just remember you don't know the whole truth in any situation unless it is your very own. When it comes to society and the underworking of humanity as a whole, there is much hidden misunderstood and much to be learned. After all in the grand scheme of existence we are still growing as a species and haven't even come close to reaching our fullest potential as sentient and intelligent beings.

"I do hope this finds you in good spirits despite the constant warfare and battles we face in the flesh and in the spirit.

"Here's to your health and your happiness as we approach 2022.

"I do hope, pray and plan on working to help bring us better days and much less division and hate.

"Ps: Try your best to just not be an inconsiderate ass to your fellow human, that's a good start.

Two and a half years ago, Leach discussed his openness about mental health in an interview with "Cutter's Rockcast". He stated at the time: "I feel like it's kind of my responsibility, but it's something I do on a regular basis, and personally, talking about it has helped me so much. I feel like that's the least I can do is keep that conversation gong, even if it's exhausting at times, even if it's hard to do. There are days out here when the last thing in the world I want to do is talk to somebody. I want to stay in my bunk and sleep the day away. Everyone who deals with certain mental illnesses knows what that is like. That's just fuel to my fire, I think. My life was saved by being able to talk about this kind of stuff, so I feel like if anything I do can help anyone in that way, whether it's just letting people know they're not alone, why would I not do that? It's something that's near and dear to my heart. It's become sort of a passion source, something I feel like I have to do."

Regarding what he would say to someone who is having mental health issues, Jesse added: "Any way you can, let people know you need help. The conversation is so important, and that feeling again of you're not alone, that is so important because I think one of the biggest causes of suicide is feeling alone, feeling like people won't understand. There's always somebody out there. There's somebody out there who probably has it even worse than you do and [can] really drop some knowledge on you and change your whole entire perspective. That's happened to me a few times. It continues to be something I struggle with; it's not going away. That doesn't mean you don't continue to talk about it and continue to push through that uncomfortableness that you may feel or that awkwardness, and that's it for me. The only alternative to that is you take yourself out, honestly, man. I have friends who have done it, and it kills me, because they know I'm there for them, but you have to sort of own it within yourself. You have to learn tools to know how to ask for help and not everybody has that. Getting therapy is really good. Taking the right pills or whatever gets you through, whether it's medical marijuana or whatever the case may be. I'm an advocate for any of that stuff — whatever gets the job done and helps you feel like you're getting help and you're less alone."