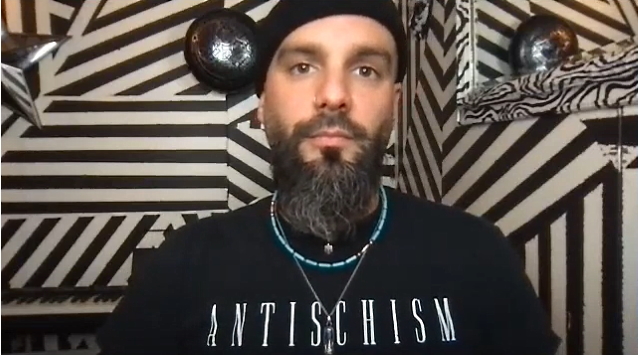 KILLSWITCH ENGAGE's JESSE LEACH: Writing For Next Studio Album 'Will Start This Year'

In a new interview with Valentino Petrarca of the WSOU 89.5 radio station, KILLSWITCH ENGAGE singer Jesse Leach spoke about the band's plans for a follow-up album to 2019's "Atonement". He said (as transcribed by BLABBERMOUTH.NET): "As far as I know, and the way that this band works, is all four of those guys who hold instruments come up with demos and riffs or parts of songs, and that process has begun, as far as I know, 'cause we did have a meeting about it on the SLIPKNOT tour. So the idea was, and this all depends on where touring goes, and we do have plans for other tours through the summer [and] at the end of the year, so depending on where the world is and [whether] we have access to [other] countries, we could potentially be touring on 'Atonement' for this year, for the most part, trying to make up for lost time. But there was discussion [about] at least starting to demo and get the ideas together for a new record this year. But, again, we don't know what the world's gonna hand us. It's such weird, uncertain times. But I know the wheels have started to turn as far as getting a concept and an idea to get the guys to start to write parts and stuff like that. So only time will tell. I wouldn't expect it to be coming out this year, but at least the ideas and the writing and the demos will start this year."

In September, KILLSWITCH ENGAGE performed without longtime bassist Mike D'Antonio at the Inkcarceration festival in Mansfield, Ohio after he tested positive for COVID-19. Filling in for him was the band's production manager Josh Mihlek.

In July, Leach and guitarist Adam Dutkiewicz released the second album from their TIMES OF GRACE project, "Songs Of Loss And Separation", via the band's own imprint label, Wicked Good Records, distributed by ADA Worldwide.