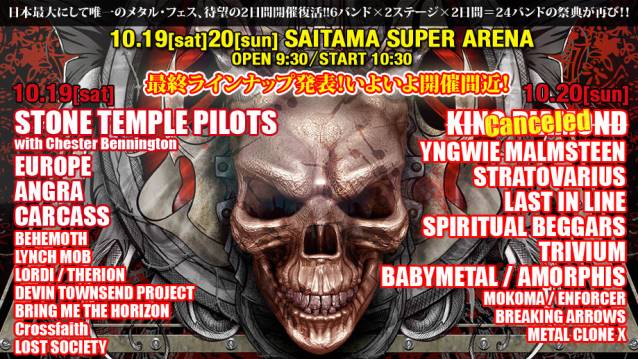 The organizers of Japan's Loud Park festival have released the following statement:

"We would like to inform you that KING DIAMOND, which was scheduled to perform at Loud Park on Sunday (October 20, 2013) has canceled their performance due to their equipment not arriving in Japan in time. The band has tried everything within its power to sort the issue out but unfortunately there is no chance of the equipment arriving in time for the show.

"We have negotiated with the band about using substitute equipment for the show, but because of their resolute stance on not being able to perform with equipment other than their own has resulted in this cancelation.

"We deeply apologize for this situation to anyone who has been looking forward to the band's performance.

"There will be no refunds caused by this cancelation of KING DIAMOND at Loud Park 2013."

After a six-year touring hiatus, KING DIAMOND triumphantly returned to the stage in 2012 for European festivals Hellfest and Sweden Rock.

King, 56, whose real name is Kim Bendix Petersen, underwent open-heart triple-bypass surgery in November 2010. He has since completed his cardiac rehabilitation program and has stopped smoking entirely, changed his diet and is getting regular exercise.

In a February 2013 interview with Metal Sucks, King Diamond stated: "I had to change my diet and become a nutritional expert, eat much better food. I stopped smoking; haven't had a drag. [My wife] Livia quit, too. We walk at least five days a week.

"I felt the benefits during two shows we did [last year]. My voice is now clearer than when I started singing. It was like always driving a used car and suddenly you have enough money to buy a new car. It felt brand new! That's how my voice feels.

"I breathe different now than I used to. In the past [when we played live], it would been like [makes a gasping noise]. Now I go off stage and start talking to close friends…. I feel like I used to live in a house with ten windows and now I have twenty windows in the house. There's so much I can see and I pay more attention to what I do see.

"My philosophy hasn't changed but I don't take anything for granted."