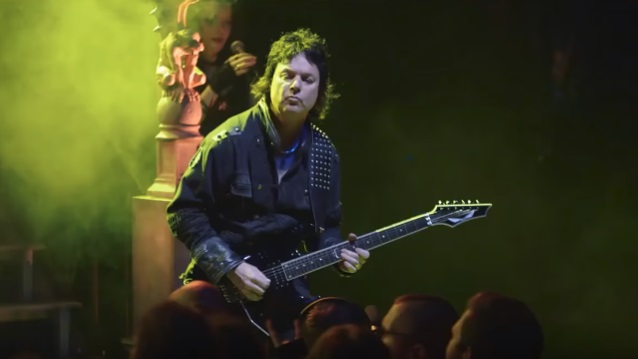 KING DIAMOND Has 'Some Great Ideas' For Next Album, Says ANDY LA ROCQUE

KING DIAMOND guitarist Andy La Rocque spoke to Canada's The Metal Voice about the progress of the songwriting sessions for the band's long-awaited follow-up to 2007's "Give Me Your Soul … Please" album. "Well, we have some ideas, and we're gonna start seriously sitting down and start with new riffs and starting to write songs as soon as possible, I would say starting around New Year's with writing songs and stuff," he said. "That's the only thing I can say. And there will be a new album, of course. It's just that since 2012, we've been really busy doing the live shows, which has been really important for us, since before 2012, we didn't really do any festivals at all — I mean, maybe one or two in our whole career — so that was a new thing for us, doing festivals. And we've been really busy doing that. Planing that and practicing, rehearsing for all those shows we did in the last five, six years has taken a lot of time, of course, so we really haven't had time to sit down and just make a good album," he continued. "Plus, all the other things we've been doing, like remasters and now the DVD and all that stuff. So as soon as things get less hectic, we're gonna start writing a new album."

Andy said that he was "pretty sure" KING DIAMOND's next album would once again be a concept record. As for the disc's musical direction, the guitarist said: "I don't really know yet, because we don't really have the songs yet. Whatever comes to mind, I believe. It's probably gonna be a good mix of everything. Probably, I would say, a classic KING DIAMOND album, with a good sound."

According to Andy, he and KING DIAMOND's frontman and namesake will jointly produce the band's next album. "And then we'll see what's happening, depending on what way we're gonna go with it," he said. "But King's got his own home studio set up, so he's gonna record all the vocals back him, in his cellar — black and dark, of course, with spiders and bones and skulls."

Regarding a possible release date for KING DIAMOND's new disc, Andy said: "It's really hard to say. I mean, we have to write the songs first and record everything and take it from there. I don't really know. I can't say anything about that. Whenever it's done, it's gonna be released. It's really hard to say. But we've got some great ideas for it; that's all I can say right now."

La Rocque also talked about KING DIAMOND's much-anticipated DVD, which was filmed during the band's "Abigail In Concert" tour a couple of years ago. "I can't really say too much about it, because I'm not the only guy in charge here," he said. "We've got the video producer and I'm working with other stuff once in a while but as soon as I get the chance, I'm working on this and get the right mix. And we also have our live engineer in charge, who's been setting everything up to get a real live feel of everything. Then I've been working on some details there. And the video producers sent me some files we have to check out, make sure everything is in sync, back and forth, and we're still working on it. But I see the light in the tunnel kind of thing, because we're getting close with the first show, which is gonna be from Chile. So we're getting close there with that one. And then there are a few other things to go through. I mean, the only thing we can do is work, work, work on it until it gets good, because this is our first DVD ever released, and we wanna have it good — we want it to be representable for what we're doing.'

According to Andy, KING DIAMOND is "not gonna use any" early video footage on the upcoming DVD. "We're gonna use, from the last years, live shows. And there's gonna be some side footage too, I believe, but I'm not sure exactly what. But mainly from live shows from the 'Abigail' performances we did the last couple of years."

Andy added that the KING DIAMOND DVD should be released "next spring — if everything goes the way we want it."

The "Abigail In Concert 2015" tour saw KING DIAMOND performing the classic 1987 album "Abigail" in its entirety.