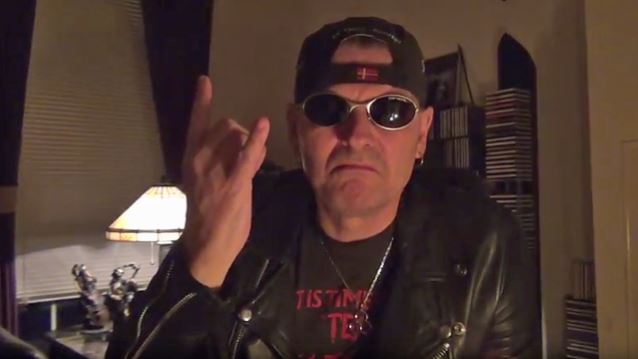 Danish heavy metal singer King Diamond (KING DIAMOND, MERCYFUL FATE),who has lived in suburban Dallas, Texas for more than two decades, has weighed in on the 2016 U.S. presidential election. He told Metal Hammer magazine: "I never talk openly about my political beliefs. I am an entertainer, and don't believe I should use this position to preach to anyone about who they should be voting for. Others might disagree, but that's the way I feel.

"I am eligible to vote in the upcoming U.S. presidential election, but I won't, because there isn't a candidate who represents what I want. In Denmark, you have thirteen or more political parties, so it's not too difficult to find a party who reflect your views. Coalitions happen all the time, and there's a decent percentage that will be represented. In America, though, it's a two-party system, and that's bad because they spend much of the time disagreeing with each other for the sake of casing arguments. If one patty suggests doing something, you know the other will automatically argue against that. So, what chance is there for a reasonable representation?"

He added: "All I would say to people is that they should read as much as they can about candidates, find out what they can, then make make up their own minds."

King also talked about his health, six years after he underwent open-heart triple-bypass surgery. He said: "I have become a lot healthier. I gave up smoking after my heart scare, my wife keeps me on a strict diet that I follow completely, and doctors are amazed at how healthy I am these days. Honestly, I think I am now healthier than I have ever been."

He continued: "I've also found that, since I made a real effort to have a healthy lifestyle, my voice has improved so much. I can now hit notes that were a struggle for me when I was younger. As for my sex life, that's just great now. And I am not saying that because my wife is sitting next to me!"

King, 59, is married to Livia Zita, the Hungarian-born singer who is 28 years his junior.

KING DIAMOND's November 25, 2015 and November 28, 2015 live shows in Philadelphia and Detroit, respectively, were flmed for the band's forthcoming DVD. The set is being helmed by director Denise Korycki (CANNIBAL CORPSE, KILLSWITCH ENGAGE),and will include additional footage from multiple shows throughout the band's most recent North American trek.