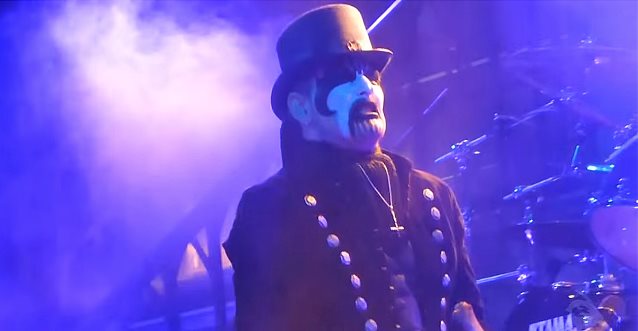 KING DIAMOND On Next Studio Album: 'It's Coming Out When It's Done'

KING DIAMOND frontman and namesake has confirmed to The Guardian that the band will begin work on a new album sometime in early 2016.

"It's coming out when it's done," he said. "It has to be one that can kill every other album we ever did."

He continued: "Andy [La Rocque, guitarist] and I have some ideas already, and I have my own recording studio out here, which means that for the first time ever I will have the opportunity to build a 50-voice choir if I feel like it! No one's there pointing at the clock, saying, 'You don't need to make it any bigger.' It will be amazing to do it this way."

The 59-year-old singer, whose real name is Kim Bendix Petersen, in December 2012 signed a new three-album worldwide deal with Metal Blade Records. He told the 107.7 WRKR-FM radio station in Kalamazoo, Michigan: "I have a Pro Tools system now and I had a vocal booth from Oregon, something called VocalBooth.com, ship 1,800 pounds of wood and metal and stuff here that me and my friends put together; one guy owns a studio and another guy has worked at one. So we put that together. And it's a vocal booth like you'll find in any studio, with double insulated walls, floating floors, all this stuff… So I can do all my vocals now from home. And that means I will never have to sing with a hoarse voice in the studio again. Like, 'The clock, it's still ticking. C'mon.' There's nothing like that now. I can work 40-voice choirs together if I want to while writing music. If I sit and work on a verse and a chorus, I can go straight in after I've done that and feel good about it and check if it's good to sing to. It's gonna be amazing. Andy has the same speakers now; he has a big studio in Sweden and lots of bands have been there recording albums. So I have lot of the same stuff [at my home studio] now. I can't record drums here, but I can pretty much record everything else here."

KING DIAMOND received a Grammy nomination in the "Best Metal Performance" category for the track "Never Ending Hill" off the group's latest album, 2007's "Give Me Your Soul … Please".