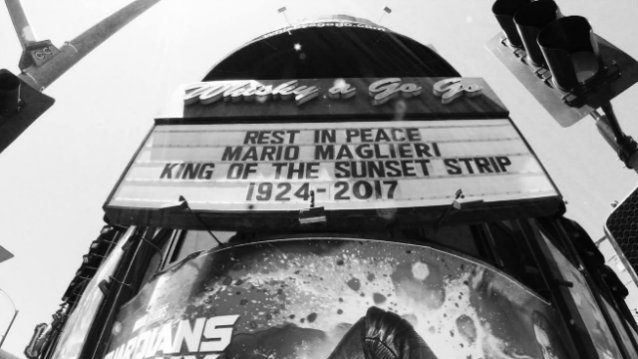 'King Of The Sunset Strip' MARIO MAGLIERI Dead At 93

Mario Mikeal Maglieri, beloved and respected owner of Los Angeles's famous Sunset Strip establishments Rainbow Bar And Grill, The Roxy Theatre and the Whisky A Go Go, died earlier today (Thursday, May 4) at the age of 93.

Born February 7, 1924 in Seppino, Italy, Mario came to the U.S. at age four. He eventually ran restaurants and clubs in Chicago until he moved to Los Angeles with his family. There he started the legendary clubs, The Rainbow, The Roxy and The Whisky.

His Italian heritage inspired the delicious food served at the Rainbow, especially the pizza, which was known as the best in the city.

Truly a lover of music and the arts, he helped hundreds of artists get their start in Los Angeles. Known as the the King Of The Sunset Strip, hopefuls from all over the world came to Mario's clubs with the desire of being discovered. He was a friend to all, and frequently came across talented musicians who went on to become platinum sellers. Their pictures line the walls of the Rainbow.

Since opening in 1964, the Whisky A Go Go on the Sunset Strip in Los Angeles has hosted some of the biggest rock stars in history, including THE DOORS, THE BYRDS, Janis Joplin, Neil Young, Smokey Robinson, THE TEMPTATIONS, LED ZEPPELIN, Alice Cooper, VAN HALEN, GUNS N' ROSES, MÖTLEY CRÜE and METALLICA. In 1972, Mario Maglieri, along with Whisky co-founder Elmer Valentine, Lou Adler and others, started the Rainbow Bar And Grill down the street from the Whisky. In its heyday, the Rainbow counted Keith Moon, John Lennon and Alice Cooper among its regulars.

"Yeah, I've seen a lot," Maglieri told The Guardian in a 2015 interview. "Things have changed on Sunset over the years, of course they have. But my business won't change until I die."

As for Jim Morrison, Maglieri said he was "just a mixed-up kid, but a good kid. I kicked his ass off-stage [when] he screwed around. He would never show up on time. But he was a good kid. He meant well. I tried to straighten him out. I saved his ass so many times."

Maglieri's love for his family was well known. He is survived by his wife, Scarlett, his son Mikeal and grandchildren Mikeal, Cheryl and Gina.

The public memorial will be held at the the Rainbow Bar And Grill on Sunday, May 28, starting at 1:00 p.m.

Dear Rainbow friends and family, it is with great sadness to announce the passing of our beloved Mario Maglieri.
Owner...

A sad day for Hollywood and The Sunset Strip we lost Mario Maglieri owner of @rainbowbarandgrill he fed me soup when had no money in the 70s when i came to Hollywood . #Rip Mario I love you

Very sad to hear this. Thank you Mario Maglieri RAINBOW BAR AND GRILL for the best place in the world https://t.co/z6LiYsckBt

Sincere condolences to the Rainbow and Whisky A Go Go family on the passing of Mario Maglieri. I'll always remember his kind welcoming greeting for over three decades on my many Rainbow visits. R.I.P.