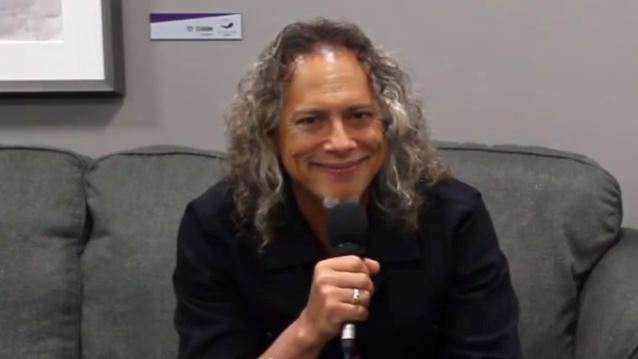 METALLICA guitarist Kirk Hammett was interviewed by Woody of the 93X radio station just hours before the band's headlining concert Saturday night (August 20) at the U.S. Bank Stadium in Minneapolis, Minnesota. You can now watch the chat below.

Speaking about the reaction to METALLICA's new single, "Hardwired", Hammett said: "I kind of feel the excitement. I can kind of feel the energy in the air. I mean, we all kind of are picking up on it. I'm getting a tremendous amount of texts from friends, saying, 'Great song. Wonderful song.' But as soon as I go on to my computer and turn it on, and think to myself, 'Should I read what other people are saying?' or 'Should I read some comments [on whatever web site]?' I instantly say to myself, 'Don't go there,' because I'll just get, first, angry, then frustrated, then confused, and then wanna just write it all off as just fucking useless bullshit, and why did I even waste my time. So, having said that, I know there's a great buzz out there, and I'm totally, totally thankful that the song is so well received."

Hammett also talked about METALLICA's mindset as it prepares to hit the road in support of the band's long-awaited new album, "Hardwired…To Self-Destruct", due on November 18. He said: "You have to understand, we have been together for 33 years. The last time we put out an album, we had been together for 25 years. Whenever we accomplish a goal… you know, we actually set out to do something and when we actually accomplish it — like making an album, making a movie, making a video, making a tour or whatever — once we get to the point where we've done the lion's share of things and we're ready to just cruise, it's always a really, really great feeling."

He continued: "The album's mostly finished — 99 percent finished — and it's a good time, because now we can go to the next step, which is playing the songs, performing them for the public, talking about them, making sure as many people as physically possible can hear these tunes and just working it like we always do.

"For us, going out and playing shows, it's really, really fun for us, really, really great, but over time, the mileage we have on ourselves, on our personal odometers, they're way up there. [Laughs] So, having said that, we have to take care of ourselves, and we have to make sure that going into this next little phase that we do it correctly and we do it in a healthy way that ensures much more longevity. And, yeah, it really feels like we've climbed the summit and we've reached the peak and now we can just cruise for a while."