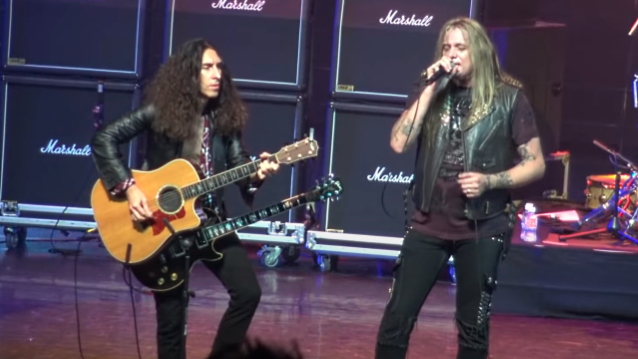 Sebastian Bach's wife Suzanne has created a video for his guitarist Brent Woods, who was recently diagnosed with a rare type of leukemia called hairy cell leukemia (HCL). The 46-minute clip, which can be seen below, includes messages of support from a number of well-known hard rock and heavy metal musicians, including members of KISS, CHEAP TRICK, FOO FIGHTERS, SLIPKNOT, JANE'S ADDICTION, STEEL PANTHER and THE DEAD DAISIES.

In a statement accompanying the YouTube release of the video, Sebastian wrote: "It's rare in the music industry when you find a Musician whose sound is so unique that it is virtually irreplaceable. My guitar player & Great friend Brent Woods is more than those things to us. Brent is a family member. As unique as his guitar sound and sense of humor is, what is even more rare in the music industry is a musician who is loved from virtually everyone in the industry that he has ever worked with or even met. Brent is the best of the best...... at wielding guitar riffs, relentlessly, precisely, and sleazily in the best Los Angeles style and sense of rock 'n' roll.

"We love you Brent and the list of people that love you is way too long to type So my wife Suzanne made this video for you!!!! You get better soon because hey man we got Rockin' to do brother! We love you Brent see you soon please wear a mask and stay safe during this holiday season and also please find my KISS shirt!!! Love you brother".

Woods revealed his health battle in a Facebook post last month. At the time, he wrote: "I was recently diagnosed with a rare form of Leukemia called HCL. Approximately 1,200 people are diagnosed every year, it's not hereditary and experts say they don't know how one gets it.

"I want everyone that reads this post to please go get your bloodwork done. I had NO idea I had this until I did. I had NO symptoms whatsoever. In fact , the only reason I got my bloodwork done was because I went to get a covid antibody test in May and my Dr. said 'It's been a while since we've seen all your bloodwork, so while you're here let's do it all'. I did and it showed a lot of my levels were alarmingly low. After months of testing, treatments and bone marrow biopsies with my hematologist, I was diagnosed with leukemia.

"I'm fortunate to have great medical insurance and I know some of you don't have insurance at all but it doesn't cost much to get your bloodwork done. It could possibly not only save your life but save you a lot of money in the long run."

According to Cancer Treatment Centers Of America, HCL is caused when bone marrow makes too many B cells (lymphocytes),a type of white blood cell that fights infection. As the number of leukemia cells increases, fewer healthy white blood cells, red blood cells and platelets are produced. This type of leukemia gets its name from the way the cells look under the microscope — with fine fragments that make them look "hairy."

Born and raised in Burbank, California, Woods started playing the guitar at the age of 12 and was a student of the legendary Randy Rhoads. He was signed to Capitol Records in 1990 with his Los Angeles-based group WILDSIDE. Brent has played and performed guitar for artists such as Vince Neil of MÖTLEY CRÜE, as well as Tony- and Emmy Award-winning actress and singer Kristin Chenoweth from the Broadway musical "Wicked". He has also worked on many films and TV shows.