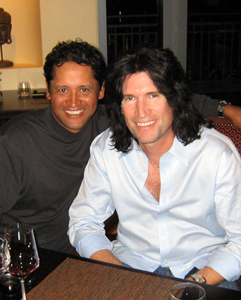 According to a posting on KISS guitarist Tommy Thayer's official web site, Tommy had the pleasure of meeting golf's 2005 U.S. Open champion, Michael Campbell, this weekend. Michael, who is from New Zealand and a massive KISS fan, invited Tommy and his wife Amber to dinner Sunday night after his final round at Tiger Wood's Target World Challeng.

"We had a great talk," says Tommy, about the surprising similarities of touring professional golfers and rock's top touring acts." Michael first saw KISS during the band's first trip to Auckland in 1980 and has been a fan ever since.

Check out a photo of Tommy and Michael at this location.