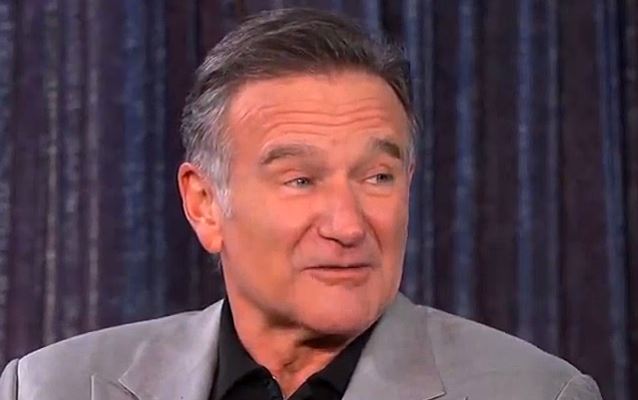 Williams was found dead at his home in Tiburon, California.

A forensic examination is set to take place on August 12.

The actor was reportedly battling severe depressing before his death.

His third wife, Susan Schneider, released a statement after the announcement of his death.

"This morning, I lost my husband and my best friend, while the world lost one of its most beloved artists and beautiful human beings," she wrote. "I am utterly heartbroken.

"On behalf of Robin's family, we are asking for privacy during our time of profound grief.

"As he is remembered, it is our hope the focus will not be on Robin's death, but on the countless moments of joy and laughter he gave to millions."

RIP fellow Illinois Entertainer-In-Arms Robin Williams. Thankyou for bringing joy to so many with ur peerless wit. #DeadPoetsSocietyRules

So sad to hear of the loss of robin Williams. We met him years ago. What an amazing talent and sweet man. So sad.

Very sad .... So much talent #RIPRobinWilliams

Saddened by the recent news about #RobinWilliams#RIP#nanonano

A staple of my childhood. You will be missed #ripRobinWilliamshttp://t.co/dEGhjtbymW

I’m speechless… Robin Williams was such an amazing and important man. My condolences to his family. Rest in peace.

holy shit. R.I.P. robn williams. grew up with that man, what beautiful gifts he gave to us

So very sad to hear of Robin Williams passing. He entertained the world and was truly one of a kind. He'll never be forgotten.

Robin you were amazing. Thank you and God be with your family.

I'm in shock over the news of Robin Williams passing! It's so tragic & a reminder of how precious life is. God bless Robin & his family....

RIP Robin Williams; you will live forever in people's hearts. You were a true entertainer.

Very sad to hear of the passing of Robin Williams. An icon of the entertainment world. Praying for his family...

REST IN PEACE ROBIN WILLIAMS. Your incredible talent will be missed.

One of the world greatest actor/comedians died today. RIP Robin Williams! You will be missed. #bummed

RIP Robbin Williams! You made me laugh more than anyone!

If you know and love this movie as I do, you will now shed tears. #RIPRobinWilliamspic.twitter.com/qwlFpkmM9T

Depression is aggressive and merciless. #RIPRobinWilliams

Robin, cheering for the Denver Broncos in 1980 #RIPRobinWilliamspic.twitter.com/IDqOfbFROJ

Whoa. Robin Williams. Sorry to hear this. I understand the struggle. Condolences to friends and family.

So sad to hear about @robinwilliams The world has lost one of their best friends.

Such a tragic loss. I will always have amazing memories of @RobinWilliams. Respect and love goes out to his family.

No one ever made me laugh like Robin Williams. Now I can't stop crying. We'll miss you, Mr. Williams.

Not sure if this is a rumor or not but if it is not then RIP Robin Williams. One of the best actors ever.

So sad! Had the honor of meeting him once! RT @nytimesarts: Robin Williams, Oscar-Winning Comedian, Dies at 63 http://t.co/UBjf0xdqiD

RIP Robin Williams. He was an incredible comedian. I have all his albums. Such a comic genius.

I met Robin Williams twice. The 2nd time I was able to throw his joke back at him. I told him "The… http://t.co/SZ7S7Ut2QR

We just lost the last of the golden age of comedy …….

Very sad news about Robin Williams! You will be missed! RIP. pic.twitter.com/oPl15eE0vQ

Very sad news. Our love, thoughts and prayers go out to Robin Williams family and friends. You will be missed! pic.twitter.com/Jkld3QGZ2c

Speechless…Robin Williams was one the greats! Sad day.

The entire Osbourne Family is grieving the loss of a kind, funny, generous and talented man, Robin Williams.

I’m so sad and devastated to hear of the passing of Robin Williams. My thoughts are with his family.

Ah shit, rip Robin Williams. Popeye was my favourite thing he did. :(

#RestInPeace@robinwilliams What A Great Talent and Loss to the World:(

Robin Williams has committed suicide. Obvious proof that material wealth means nothing when battling depression. Thank you for the laughter

So sad, so sad, he who made me laugh so much; one of the greats is now gone. #RIPRobinWilliams Be at peace, Robin.

A real shame that people who can give so much light to the world can have so much darkness in their own. RIP Robin Williams. Sadly missed!

Heartbreaking to hear about Robin Williams. Whatever demons haunted him in life he brought so much laughter to all. He's finally at peace...

We were LUCKY to have Robin Williams as long as we did.

#RIP to one of the best ever, Sir Robin Williams.

Speechless over Robins death,you never know who's hurting behind there smile... Via Con Dios....

RIP Robin Williams. Very sad loss, he brought joy to so many of us our entire lives. May he find peace in the... http://t.co/PWZ17hy8fx

Life is so very fragile. RIP Robin.You gave us all such joy.;(

Robin Williams blessed us with his presence , his brilliant mind and his gift of comic genius. A true ... http://t.co/NpXpBtq2pD

RIP Robin Williams. Thank you for a lifetime of laughter. You will truely be missed. Our hearts and prayers go out to your family & friends

Sad to see when those that bring the most joy also suffer the most pain. #ItAlwaysGetsBetter#RIPRobinWilliams

So sad to imagine that someone who brought so much joy and laughter to others felt so much saddness and despair.... http://t.co/v5f3mrcqPo

This is the saddest day ever! The kindest man I have ever met leaves us all today! @robinwilliams my heart bleeds pic.twitter.com/sUWe4lp8hK

Mr. Williams, Thank you for sharing your incredible gifts with us all. Now I know that Nanoo Nanoo means See you on the other side...