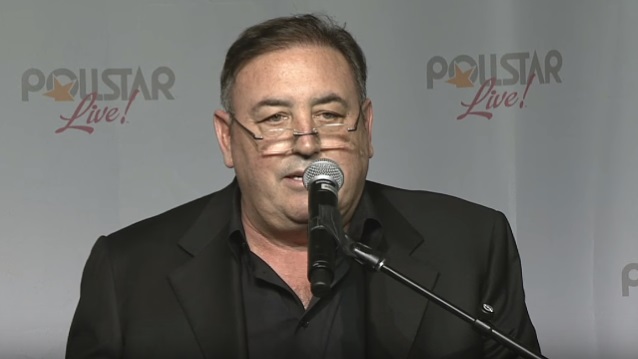 According to All Access Music Group, McGhee Entertainment partners Doc and Scott McGhee have announced the conclusion of their 25-year business relationship. McGhee Entertainment's web site lists clients that include KISS, Paul Stanley, Ted Nugent, A THOUSAND HORSES, LOVE & THEFT, and others.

In a recent interview with "The Unwritable Rant" podcast, Doc stated about the modern music industry: "The money is there. If it was easy, everybody would be doing it. On the other hand, yes, there was a bleak moment when things were looking like there wouldn't be any money, that people weren't buying the music, that didn't want to... It's hard to cry poor when you're Lars [Ulrich] from METALLICA, when you may have missed your last $300 million painting. It's hard when someone says, 'Oh, Paul McCartney couldn't get his copyright back.' But before streaming started to come through, it looked like the light at the end of the tunnel was a train, and that people weren't going to buy music, they weren't even going to buy digital downloads, and that music wasn't important to people. Therefore, the only thing that you had to do was play live for your money — which, if you weren't in that 'C act' or up, you couldn't make any money anyways. The Sonys and EMIs and everybody else... went from, I don't know what the number is, but probably one-tenth of the amount of people that they had in 1997. They fired people. It was a bludgeoning for 15 years. It was just a bloodbath. All of my friends that were in the record business that were in the high positions would say, 'I'm so sick of waking up in the morning and [having] to fire my friends.' All of a sudden, streaming comes about... I think there's a huge upside in streaming. Now we have a terrible issue of how do we get market share and how do we get our music to the public. In the digital space, they say you need to have analytics so you can go to terrestrial radio — which is still king — and go to your format and say, 'Hey, look at my song — my song has 10 million streams.' Then they go, 'Wow, that's interesting. I'll put it on my format at terrestrial radio.' [But] they have 200,000 files a day that come to them, and they have about 15 people that are in charge of those 200,000 files. Where you fit on playlists and where you get exposure and how that all works is now what we're dealing with, and what we have to build."

Asked if he truly believes KISS can continue without Gene Simmons and Paul Stanley, Doc said: "Is there a next generation Green Hornet? Is there a next generation of Superman? No, there's just fucking Superman. There's been six of them, [but still] it's Superman. As long as these kids walk out there and they have that makeup and they have that attitude and they have a great fucking visual show... This isn't 'Dark Side Of The Moon'. People didn't come here with their fucking headphones on to fucking have this musical experience. They came here to have fun, to see shit blown up, people flying around. It's fucking Cirque Du Soleil. If you put nothing on stage but talent, they're going to fucking die. That's what KISS is — KISS is a way of life."