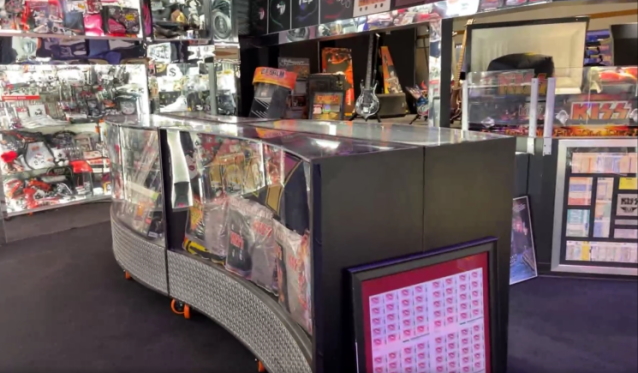 A video walkthrough tour of the newly opened Kiss World museum in Las Vegas can be seen below.

The 2,000-square-foot expansion of the glow-in-the dark attraction Kiss By Monster Mini Golf at the Rio Hotel & Casino is attached to what is a 15,000-square-foot KISS-themed space in Masquerade Village.

"My personal collection is gonna be at the Rio hotel, and it's gonna be a chance for all the fans to go up there and see close to ten thousand items — lyrics and things and guitars," KISS bassist/vocalist Gene Simmons said last December. "No band has got this. We are the juggernaut of them all in licensing and merchandising. But instead of being in one of my big houses, the fans will be able to go there, see, look, touch, take photos. And there will be video screens in the back so you'll be able to be up on stage with KISS, if you can imagine. And by the way, it's also in the inside of the Kiss Mini Golf where you can play golf. And you can get married at the Kiss Chapel. We have a little person wearing my makeup and it looks like this: 'Repeat after me: I was made for loving you.' 'I was made for loving you.' 'And then you were made for loving me.' And they get married."

KISS continues to be among the most merchandised bands in history and a pioneering force in the music merchandise and licensing industry, with KISS-branded merchandise available in major retailers around the globe, including Nordstrom, Macy's, Urban Outfitters, Hot Topic, Torrid, Tilly's, Pacsun, Cotton On, Revolve, Nasty Gal, Princess Polly, Target, Walmart and Kohl's, among many more.

In the international marketplace, recent strategic partnerships include Brands For Fans for gin and dark rum in Europe, Japan, and Australia; Metal Departments for real money gambling worldwide; Fexpro for apparel and accessories in Mexico, Central America, and South America; Konnekt for apparel & accessories in Japan; and EastPak for bags, backpacks and accessories in U.S. Europe, Middle East, Asia and Canada; among many others.

Back in 2017, Billboard reported that KISS had hit the 125 global licensing deal benchmark with longtime merch partner Epic Rights. By that time, the band had already sold some half a billion dollars retail value at stores and concerts. In 2015, KISS made the Top 150 Licensors List published in License Global.

KISS frontman Paul Stanley told Billboard that the band's merchandising began "organically. We came at a time when fan clubs were frowned upon," he explained. "Fan clubs harkened back to an age of Fabian and Frankie Avalon and seen as a ploy by management and record companies to sell the flavor of the week. But when we came into being, people wanted to align themselves with us. They were the ones who said, 'We want a t-shirt, a belt buckle.' It's very easy to tag us as marketing geniuses, but I would rather say we have very acute hearing."

Asked if KISS ever got criticized for the merchandising, Stanley said: "We were snickered at by other bands until they saw the checks we were getting and all of a sudden they joined the parade. I tend to think we live by a law of commonality. In other words, no one is that different from anyone else and when i can provide something that I want and satisfy a need in myself I satisfy a need in someone else."

Paul also confirmed that KISS does, from time to time, turn down merchandising deals. "There is nothing that's worth doing that is immoral or unethical — I think if you stick with that, you're in good shape," he said. "There were times we were offered significant amounts of money for either playing some place we thought was not holding up their end in terms of social, political or humanitarian activity and we also said no to tobacco companies. Over the years, and more so now than ever, I realize I have to answer to my children. They can't see their father as a fraud." 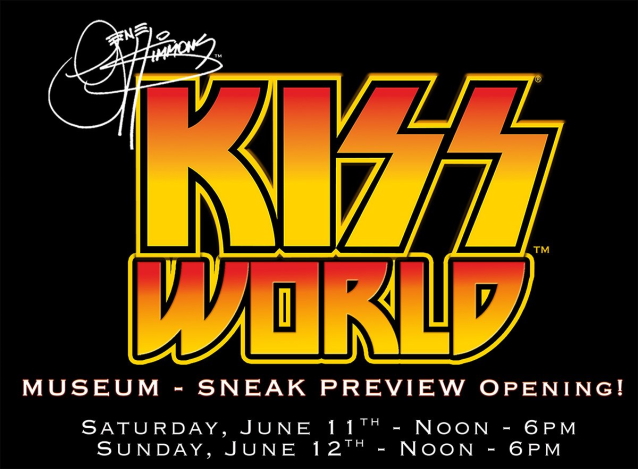