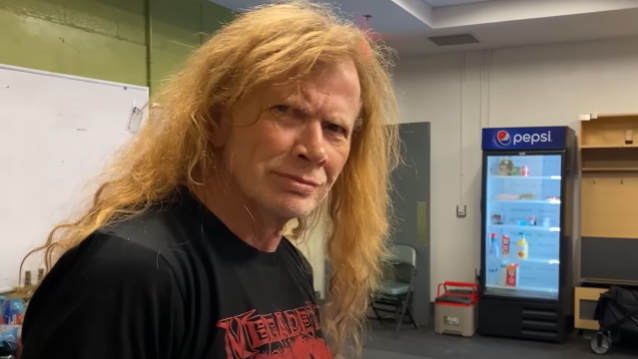 MEGADETH's Dave Mustaine has blasted "lazy" bands who rely on pre-recorded tracks during their live performances.

In recent years, more and more bands have been given a pass for using backing tracks, drum triggers and other assorted technology that makes concerts more synthetic but also more consistent.

Speaking to Kerrang! Radio at this month's Download festival in the U.K., Mustaine addressed the use of pre-recorded tapes at live shows, saying: "I've always done the background singing on the records until — maybe about 10 years ago, we started having another person come in and help supplement the vocals because it's just not my bag to be singing stuff that I'm not gonna sing live. I sing when I sing live on the records as much as I can.

"I don't think there's anything wrong with using supplements for songs and other sounds and stuff like that if you can't play 'em live," he continued. "If you can play it live and you're being fucking lazy and you're seeing whatever just happened a couple of days ago with one of those big bands, and the singer… the tape started and the drummer wasn't playing or something. You probably heard about that. I can't remember who it was," Mustaine said, apparently referencing a rare "mistake" by KISS drummer Eric Singer during the band's concert in Antwerp, Belgium earlier this month which revealed what some fans are saying is proof that KISS is using pre-recorded tracks during its performances.

Dave added: "We don't have vocals that are canned. Usually what we have is a MIDI click track that runs all of our lights and switches all of our solos and stuff."

Ever since KISS's "End Of The Road" trek launched in late January 2019, there has been persistent online chatter about Paul allegedly singing to a backing tape. The speculation stemmed from the fact that Paul Stanley had been struggling to hit the high notes in many of the band's classic songs for a number of years.

Three years ago, former SKID ROW singer Sebastian Bach defended KISS against claims that the band is using pre-recorded tracks during its farewell tour, saying that Stanley sang "his ass off LIVE" during a concert in California. "I have seen way more obvious use of backing tracks than with KISS," Sebastian wrote on Twitter.

FOZZY frontman Chris Jericho also defended Stanley's vocal performance on "End Of The Road" tour, saying that the "Star Child" "has nothing to prove to anybody." Jericho explained: "He's one of the greatest rock and roll singers of all time. I think that's something that anybody would say. I would much rather have him use the technology that's available to not sound like he's hurting himself, which then makes me not enjoy the show as much."

Most fans assumed that Sixx was referring to KISS, especially since Gene Simmons has previously slammed bands who used backing tapes for not being honest enough to include that fact on their concert tickets.

After KISS played on NBC's "America's Got Talent" in September 2018, Stanley was asked by Rolling Stone if that was actually a live performance or if he and his bandmates tracked it earlier. "What you tend to do is record it live and that way you know that everything is as it should be," he responded. "It's not like going into the studio or anything like that. It's…with all its imperfections, it's live."

Sixx has been open about his band's used of taped vocals during live concerts, saying, "We've used technology since '87." He added the group employed "sequencers, sub tones, background vox tracks, plus background singers and us. [MÖTLEY CRÜE also taped] stuff we can't tour with, like cello parts in ballads, etc.... We love it and don't hide it. It's a great tool to fill out the sound."

Back in 2015, Simmons slammed bands who used backing tapes, saying: "I have a problem when you charge $100 to see a live show and the artist uses backing tracks. It's like the ingredients in food. If the first ingredient on the label is sugar, that's at least honest. It should be on every ticket — you're paying $100, 30 to 50 percent of the show is [on] backing tracks and they'll sing sometimes, sometimes they'll lip sync. At least be honest. It's not about backing tracks, it's about dishonesty.