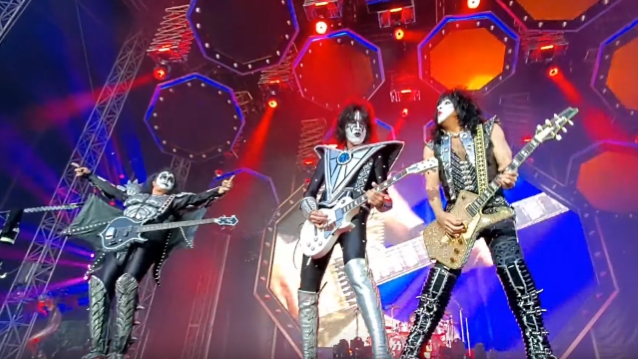 KISS Performs 'It's My Life' Live For First Time (Video)

KISS played the song "It's My Life" live for the first time during its set Friday night (November 1) aboard the "Kiss Kruise IX". Fan-filmed video footage of the performance can be seen below.

The group' setlist was as follows:

In early 2018, Paul Stanley disputed Gene Simmons's explanation of how "It's My Life" came together, insisting that he "wrote the title, chorus, chords, melody and lyric" to the track before Gene got involved and "wrote the rest."

"It's My Life" was originally demoed for KISS's 1982 album, "Creatures Of The Night", but it did not make the final record. It was later re-recorded for 1998's "Psycho Circus", but once again found itself excluded from a KISS album for which it was recorded.

Gene's original demo version of "It's My Life" is one of the tracks featured on his massive collection "Gene Simmons - The Vault Experience: 1966-2016", which celebrates the KISS co-founder's 50 years in music.

A different version of "It's My Life" was included on "WOW", the debut solo studio album by THE PLASMATICS singer Wendy O. Williams, which was produced by Simmons and released in 1984 by Passport Records.

While promoting "The Vault" box set, Simmons told the story of how "It's My Life" came to be recorded by Williams. He said: "KISS had taken out THE PLASMATICS, featuring Wendy O. Williams on lead vocals. During one of the shows, Wendy came up and said that she wanted to do a solo record and would I like to produce her. And I said, 'Sure. I think it'd be a great idea. But if I'm gonna produce you, I'm gonna decide everything. I'm gonna decide which songs you record, and if you don't have the songwriting talent within the band, then I'll get you the songs, or I'll write some stuff for you. But the songs have to be first and foremost.'"

He continued: "Paul Stanley had an old piece that he started working on called 'Every Little Beat Of Your Heart', so I took the chordal passage and I wrote a brand new song around it called 'It's My Life': 'I've got a reputation / people know who I am / rules are made to be broken / you can't kill what you don't understand,' which felt very much, and I designed it, to be Wendy talking about herself, about being an individual. And, yeah, she's a chick, but she'll be damned if she'll let any guy tell her what to do."

After BLABBERMOUTH.NETpublished an article about Simmons's first-ever live performance of "It's My Life" — which took place during his February 16, 2018 concert at the Lynn Auditorium in Lynn, Massachusetts — Stanley took to his Twitter account to set the record straight regarding the song's origin.

Paul wrote: "For anyone it matters to... The song 'It's My Life' had nothing to do with any other song of mine. I wrote the title, chorus, chords, melody & lyric to 'It's My Life' and didn't want to use at the time. Gene wanted to use it so he wrote the rest. THAT'S the story!"

He added in a separate tweet: "FYI...I wrote for the song 'Every Little Beat Of Your Heart' for the Bob Ezrin project which became 'The Elder'. It's transformation started when Lou Reed wrote a terrific lyric poem for it called a 'A World Without Heroes'. Bob put them together."