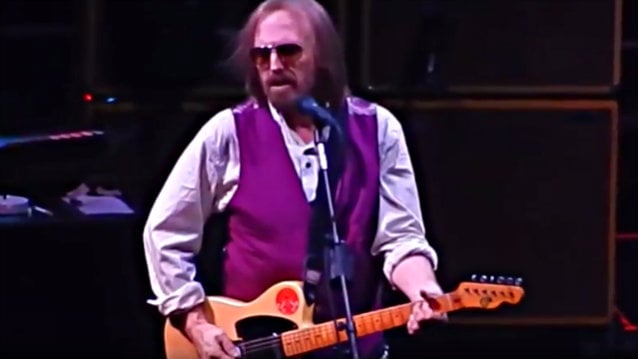 **UPDATE**: CBSoriginally confirmedPetty's death per the Los Angeles Police Department, but TMZ claims the musician is off life support with a "do not resuscitate" order from his family, and is still clinging to life. He is not expected to live through the day.

The CBS news division said in a statement: "CBS News reported information obtained officially from the LAPD about Tom Petty. The LAPD later said it was not in a position to confirm information about the singer."

KISS, SEPULTURA, ANTHRAX, SHINEDOWN, LIVING COLOUR and POISON members are among the musicians who have reacted on social media to the reports of Tom Petty's passing. The rocker, who led the band THE HEARTBREAKERS, was reported by several outlets to have died Monday, although that information has since been disputed. He was found unconscious and not breathing in his Malibu home Sunday night. He was taken to UCLA Santa Monica Hospital and put on life support.

(1/2)The LAPD has no information about the passing of singer Tom Petty. Initial information was inadvertantly provided to some media sources

(2/2) However, the LAPD has no investigative role in this matter. We apologize for any inconvenience in this reporting.

No! We have lost Tom Petty. From our opening act in the seventies to becoming a brilliant songwriter and performer I have loved his music. pic.twitter.com/yhyPCfm2l6

Tom Petty will always be an amazing influence in this world. Thank you for your music sir.👏🏾❤️

Jeez this sux so bad https://t.co/iBAneiUV0d

Way too young...Rest In Peace Tom.... You'll always be remembered as a Giant pic.twitter.com/OBDdtdKBgk

So sorry to hear we lost Tom Petty..thank you for the music, your time here brought much joy to the world...rest in peace. :(

One of the most distinctive voices in R&R. The Confederate Flag thing pissed me off, but Petty was one of the GREATS. Very sad to hear
R.I.P https://t.co/TAyIWWte4F

You and I were lucky to live in the Tom Petty era ... Don't you forget that

So sad to hear of the passing of my all time hero Tom Petty, R.I.P Tom, the world won't be the same without ya.
Mw #eventhelosers

Deeply saddened to hear about @tompetty. Another amazing talent has left us...#riptompetty🎸 https://t.co/xKx0gadjoX

We are heartbroken beyond words. Shattered. Tom Petty’s music has been a huge part of our lives. Our thoughts are with his family & friends. pic.twitter.com/Kfz6WJyv3v

Whaaat? Tom Petty is gone?!! I can't believe it. One of my absolute favorites and one of the greatest... https://t.co/CQSVkF985i

RIP Charlie T Wilbury Jr 😓 Say Hello to Nelson & Lefty... Thank you for all of the great music...Today we're all heartbroken 💔 #RIPTomPettypic.twitter.com/hU7HUA21Z0

Love me some Tom Petty #RIPTOMpic.twitter.com/pmXrIRLHgN

Tom Petty. One of the greatest songwriters of our generation.Thank you for ALL the music.Prayers to your family & band members.#RIPTomPetty

RIP Tom Petty.
one of the greatest American songwriters EVER.

Tom Petty. Without a doubt one of the best god dammit.

I can't think of a part of my life that a Tom Petty song or record wasn't involved in .... From birth till last night in my car ......

Just when I thought today could not get any worse…
R.I.P. Tom Petty. Thank you for your beautiful music and inspiration.

Thanks for everything Tom.... #whatashittyday

My heart is broken. We lost another legend today. Tom Petty was a rock n Roll rebel, unapologetic and always true to himself. He trusted his rock n Roll compass, and no one was better at putting honest words into music. Every time I listen to Wildflowers, I immediately need to sit down and write a song. Tom, thank you for your music, your attitude, and for never listening to anyone who said you can't! You will continue to inspire me and be a keystone in my musical journey.

Nothing left to say