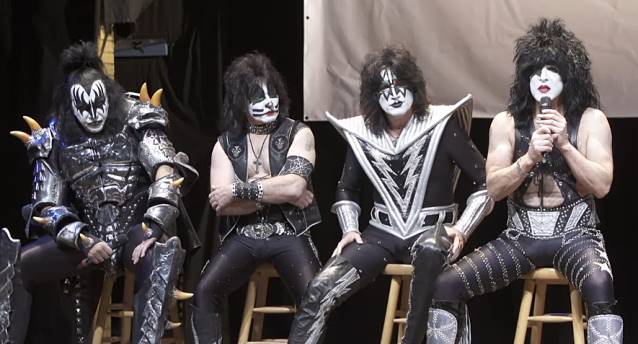 KISS has collaborated with the Japanese pop group MOMORIO CLOVER Z on a new single, to be released on January 28. The track "Yume No Ukiyo Ni Saitemina" was composed by KISS guitarist/vocalist Paul Stanley and Greg Collins, with lyrics written by Yuho Iwasato. MOMOIRO CLOVER Z performs the song, with KISS providing background vocals and instruments. It will be released in two versions — "Momoclo Edition" and "KISS Edition" — via iTunes in 120 countries. A music video for the track, featuring both bands, has already been shot in Las Vegas.

"Samurai Son" will also be made available on KISS's upcoming Japanese special edition of songs culled from the 2014 "KISS 40" release, alongside 19 tracks spanning the band's four-decade career and a DVD featuring three exclusive live performances, released to commemorate KISS's 2015 Japanese tour. The DVD includes three songs filmed at the Budokan in Tokyo on October 24, 2013. Audio from that version of "Hell Or Hallelujah" was previously released as a bonus track on the Japanese edition of "KISS 40".

A six-minute promotional clip for the special edition of "KISS 40" can be seen below.