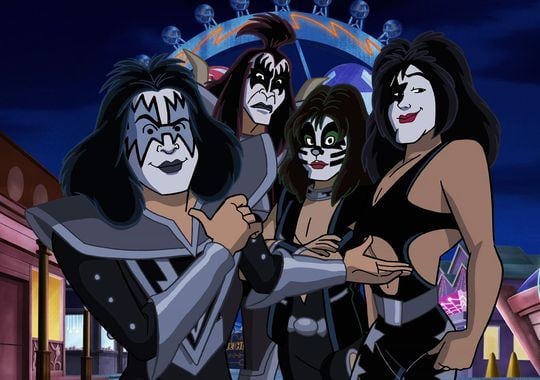 According to USA Today, KISS has recorded a new song for the the animated film "Scooby-Doo! And Kiss: Rock And Roll Mystery", available July 10 on digital HD platforms and July 21 on Blu-ray/DVD from Warner Bros. Home Entertainment.

KISS members Gene Simmons, Paul Stanley, Eric Singer and Tommy Thayer voice their own characters in the movie, which focuses on a Halloween concert at the group's amusement park Kiss World.

A trailer for "Scooby-Doo! And Kiss: Rock And Roll Mystery" can be seen below.

In a 2010 interview with Spin, Stanley spoke about how KISS has always been forward thinking about things like branding and merchandising.

"The business side of the band is something that other bands can't do," he said. "They can't do it. It's not of interest to their fans. No one wants an EAGLES belt buckle."

He continued: "KISS has always been outside of the borders of what other bands can do. Not that some of these other bands wouldn't want to do it — the fact that they may snicker or look down their noses at what we do is more out of jealously than anything else."