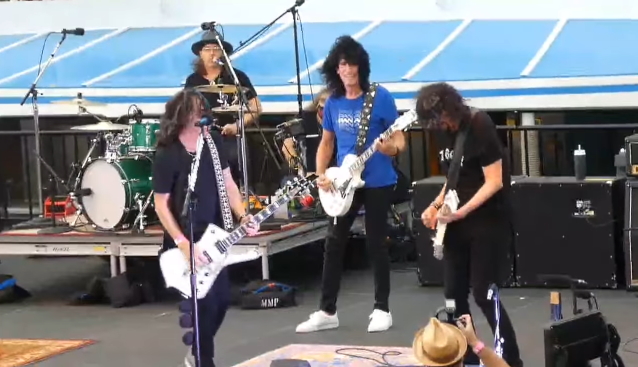 Ex-KISS guitarist Bruce Kulick rejoined his bandmates on stage yesterday (Friday, October 29) aboard the "Kiss Kruise X" to perform two of the group's classic songs: "Tears Are Falling" and "Heaven's On Fire". Fan-filmed video of his appearance can be seen below.

KISS's annual "Kiss Kruise" event — in which the group performs aboard a cruise ship’s pool deck — kicked off on Friday. Fans need to be vaccinated to attend, bassist/vocalist Gene Simmons told The New York Post a few days ago.

Earlier this year, Kulick spoke to Rockin' Metal Revival about how the band's reunion with Peter Criss and Ace Frehley for an episode of MTV's "Unplugged" in 1995 paved the way for a KISS tour that would exclude him and drummer Eric Singer.

"[KISS's official] convention tour [in 1995, where Criss rejoined KISS for two songs in a surprise appearance] was what triggered the opportunity for 'Unplugged', but, quite honestly, it also was the catalyst for the reunion tour, which meant the end of my [time with the band]," Kulick said. "That's the bittersweet [part about it]. Now, you've gotta remember, those guys [Ace and Peter] were always, like, 'Hey, I'd love to be back in the band,' this kind of thing. Or, 'What do you think about a reunion?' And I don't think Gene and Paul [Stanley] really cared to entertain that until the 'Unplugged' thing came around and MTV really wanted those guys involved. And then, all of a sudden, people were interested; promoters were throwing big offers to the guys. So it was kind of weird. Eric Singer and I, in January of '96 is when we were told that they were gonna make the announcement at the Grammys, or something, the next month, and we were finishing 'Carnival Of Souls'. So it really was a weird time of my life and everything."

Bruce remains philosophical about his exit from KISS, saying it had nothing to do with his ability or the chemistry he had with the rest of the band.

"I wasn't not going to be in KISS because I didn't play well enough or I didn't get along with the guys; it was purely a business thing," he said. "I always like to say sometimes that it seems like 'Star Wars' went away for a long time, and then, 20 years later, all of a sudden, the franchise retools and there's more 'Star Wars' movies. So the makeup KISS, it was time for that to come back, and, as you know, the numbers don't lie — they did tremendous business. That might have been the end of me actually being in the band, but my connection to the band's been very strong all these years."

Back in 1996, Gene called "Carnival Of Souls" "the heaviest disc we've done," and Paul called it "arguably our best studio album in the last 10 years."

I got the stage set list from tonight’s show! #KissNavy#KISSarmy#KISSKruise#KISSKruiseXpic.twitter.com/Z7NxCLI4aW