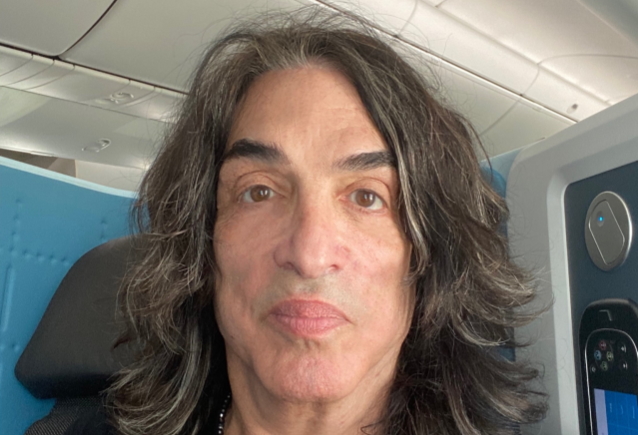 KISS's PAUL STANLEY: 'It Breaks My Heart To See The Cancer Eating Away At The Heart And Soul Of This Amazing Nation'

KISS frontman Paul Stanley says that he is saddened by the state of American politics amid a loss of civility, raising the possibility that the polarized American electoral system has come to the point at which a return to traditional democratic norms will be extremely difficult, if not impossible.

On October 30, the 70-year-old Stanley took to his Twitter to write: "I LOVE MY COUNTRY: I have to say it breaks my heart & frightens me to see the cancer eating away at the heart & soul of this amazing nation. Integrity & intelligence battling personal advancement & ignorance. When did those who don't share our views become the enemy and when did our fellow citizens decide it was 'American' to push for elected officials who would trample on the liberties & religious beliefs of those who don't share theirs? Constantly accepting the next 'new normal' can only bring us closer to a new unimaginable."

Nearly two years ago, Stanley defended his right to speak out on political issues, saying that he voices his opinions as a "proud citizen" of a country he loves deeply.

In January 2021, the KISS frontman took to his Twitter to write: "If You Are A Fan Who Now Feels My Opinions Are Alienating You, that is sadly your choice & not my intention. Do the entertainers you enjoy have to share your beliefs? Would you like it more if you didn't know? In many cases you'd be fooling yourself. I won't do that to you or me."

Two days earlier, he wrote: "To All Those Who Don't Share My Views... You are not my enemy. A democracy needs those differences to make it better & ultimately stronger. Friendship doesn't need agreement. OUR enemy should be anyone who turns us against each other for their personal gain."

Stanley expounded on his reasons for being so vocal on social media, writing: "I voice my opinions as a proud citizen of this country I love deeply. My profession should't disallow that as we all have that right so many have fought & died protecting. I also understand that the people who would like me to stay quiet are those who don't share my views. Sorry."

A few days after the U.S. Capitol riot, Stanley called out Republican senators who stoked the election conspiracy theories that sparked the violent attack by supporters of then-U.S. president Donald Trump.

This past August, Stanley once again slammed American mainstream media outlets for only reporting one political side of the story with bias. The KISS frontman, who is in the middle of the band's "End Of The Road" farewell trek, took to his Twitter to share the logos of several major cable news networks — specifically Fox News, CNN and MSNBC — and he included the following message: "WANT TO HAVE A MORE UNIFIED COUNTRY? Have a more unified news! Not poisonous bickering & slanted distortions on BOTH sides. How can we form educated points of view when we're not getting the unbiased truth? We don't need networks pushing opinions. We need ACCURACY. We need FACTS."

This was not the first time Stanley had been critical of the way the American media reports its stories. Back in January 2020, Paul wrote on Twitter: "The divisive and dangerous climate in America is in large part the result of 24 HOUR 'NEWS' CHANNELS WHICH ARE IN FACT SKEWED AND BIASED POLITICAL OUTLETS . Any point of view can be backed up with some sort of documentation and 'expert' analysis and that is the key problem. News?!? No. We are watching slick entertainment channels pushing their own agenda and a reality which then becomes yours."

In June 2019, Paul tweeted out the BBC News logo along with the following message: "If You're Ready For News With Far Less Of The Game Show Slickness And Bias Of Our 24 News Networks You Might Try One Of The BBC Outlets. Less Exciting? YES! But Filling 24 Hours Is An Unnecessary Challenge That Has Turned Outlets Into Biased Fast Food Providers."

In August 2018, Stanley said that he does not believe the press is the enemy of the American people, presumably in response to Trump, who has regularly derided the media as such.

Stanley offered his opinion in two separate tweets, writing: "JOURNALISTS And The Media Are NOT The Enemy Of The People. Without the opportunity to hear all points of view we can't find the truth. Those who want to silence opposition and questions or turn the public against them ARE The Enemy Of The People And Of [email protected] @FoxNews"

He added: "Because ALL media coverage of politics is clearly biased now, we should accept that EVERYONE is participating and NOBODY is innocent. THAT is all the more reason we need to hear it all."

1) I LOVE MY COUNTRY: I have to say it breaks my heart & frightens me to see the cancer eating away at the heart & soul of this amazing nation. Integrity & intelligence battling personal advancement & ignorance. When did those who don’t share our views become the enemy and when…

2) did our fellow citizens decide it was “American” to push for elected officials who would trample on the liberties & religious beliefs of those who don’t share theirs? Constantly accepting the next “new normal” can only bring us closer to a new unimaginable.