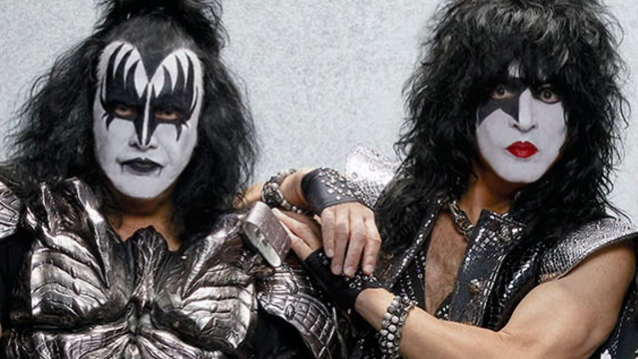 KISS's PAUL STANLEY On GENE SIMMONS: 'I Couldn't Be Closer To Him Than I Am Now'

In a brand new interview with Dean Delray's "Let There Be Talk" podcast, Paul Stanley spoke about his continued partnership with fellow KISS co-founder Gene Simmons — this despite their seeming like extremely different types of people. Asked if things were "strange" between him and Gene after the release of Stanley's 2014 memoir, "Face The Music: A Life Exposed", Paul said (hear audio below): "No. Gene's always been very accepting. And we've only gotten closer and closer over time, which is just terrific.

"I said things in the book that I felt were true, and I would stand by what I said," Stanley continued. "But it doesn't negate that in the scheme of things, he's been a terrific partner, he's a brother, and he's family. Certainly there were things that I spoke about in the book that aren't true anymore, but they were, to me, at some point. And that book was really my overview of my life. And I really didn't say anything to hurt anyone, and I didn't wanna throw anybody under the bus. There were a few people who walked under the bus — I didn't have to throw 'em.

"I think Gene has always respected that I have my own perspective," Paul said. "And, again, I couldn't be closer to him than I am now. Totally. I speak to him often.

"It would be crazy and sad to go through what we've done together and what we've accomplished and have ill will or animosity. If anything, the two of us look at each other and go, 'Wow!' In those moments of candor, or when we're just talking to each other, or texting each other, there are those texts where it's, like, 'Wow! Look what we've done.' So, yeah, anybody who thinks otherwise is sadly mistaken. His family is my family. Shannon [Gene's wife], I've known Shannon probably 35-plus years. [Gene's kids] Nick and Sophie, I feel like their uncle.

This past January, KISS kicked off its second farewell tour, dubbed "End Of The Road", which is expected to run through the end of 2021.