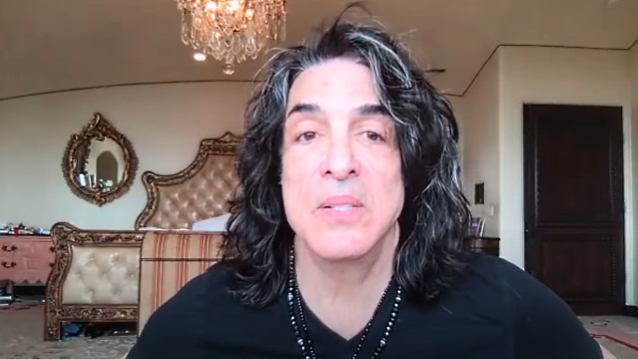 Paul Stanley has blasted right-wing influencers and QAnon supporters who are waging an information war against Anthony Fauci, the director of the National Institute Of Allergy And Infectious Diseases and top-ranking member of the White House's Coronavirus Task Force, for falsely claiming that Fauci is working the "deep state" to cause an economic collapse and discredit President Donald Trump.

Appearing on episode 19 of Richard Marx's "Social Distancing" talk show, the KISS frontman said (see video below): "You have somebody like Anthony Fauci talking, and for all of his credentials, there are still people who are questioning his agenda and whether he's part of the 'Deep State' — there's terms that are thrown around, and I don't know where they started. But it's a shame — it is so unproductive. And I hope we'll see a time where the country will find the things that bind us together rather than suspicions that tear us apart."

Stanley also took issue with people who are continuing to ignore the fact that COVID-19, the disease caused by coronavirus, is officially 10 times deadlier than the H1N1 swine flu strain that ripped across much of the world in 2009.

"When this pandemic first started, people were touting figures of, 'Well, the swine flu killed X amount of people,'" Stanley said. "Yes, in a year. These figures that we have are over two months. And this is far from over. And then we have people say, 'Well, the experts keep changing their opinion.' That's actually a good thing. This is all the unknown. And because it's the unknown, it means that, yes, this is fluid. It means that, over time, 'Don't wear a mask.' 'Yes, wear mask.' What are the contagious factors? That changes over time. It doesn't negate the credibility of the people talking. It shows that they are on the frontline. But it's lost on some people.

"When I saw footage of people walking on beaches in Florida — even in Los Angeles — it's mind-boggling," Paul continued. "And the horrible situation you have right now in New Orleans. You have people getting together and ignoring one side of what supposedly is the truth and listening to people saying it's nothing."

Stanley went on to say that the message about coronavirus people are getting from the networks isn't the same, with eight in 10 Fox News viewers saying the media exaggerated the threat from coronavirus as compared to 54% of CNN viewers and just 35% of MSNBC watchers.

"Any conversation I've had with somebody who feels contrary to [a particular point of view], they stick to their guns because their reality is based on information that they're getting from a source that has their own agenda," Stanley said. "I'm not saying that CNN is guiltless. It's really become the network of the Democrats versus the network of the Republicans, and your reality and what you see as the truth, not coincidentally, is based upon which network you watch. And that's terrible. We're living in separate universes. If you go from one channel to the other, you think you're in a different time.

"If I were to watch whatever network I watch that's called 'The News,' it's going to feed me what I believe to be reality," he added. "That's the basic truth of it. And, unfortunately, there seems to be different realities, alternate realities… There's gotta be a truth."

More than two million coronavirus cases have been reported worldwide and more than 119,000 deaths so far, putting public health systems and emergency services under immense pressure.