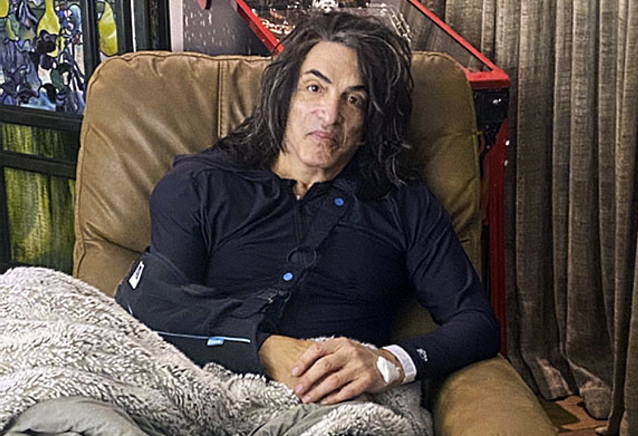 Several hours after the procedure, the vocalist/guitarist, who will turn 70 next month, took to his Twitter to share a post-op photo of himself resting at home, and he included the following message: "SHOULDER SURGERY TODAY! How many show related surgeries have I had?? I lost count at EIGHT!! Was it worth it?!? ABSOLUTELY! Judge the value of what of you have by what you sacrificed to achieve that goal. This was a joy-filled BARGAIN."

This past May, Stanley spoke to SiriusXM's "Jim & Sam Video Interviews" about how his stage performances have damaged his body. He said (as transcribed by BLABBERMOUTH.NET): "Both my rotator cuffs have been repaired. I popped my bicep tendon about a year and a half ago and that had to be surgically repaired. I've torn the cartilage in both my knees, and that's been taken care of. I've had a hip replacement. But modern medicine and science, God bless it. I'm good for another 50 thousand miles."

Stanley confirmed that KISS-related activities are to blame for his physical injuries over the years.

"Most of my doctor friends, my orthopedic surgeons say, 'There's no 60-year-old, there's no 50-year-old basketball players, football players, and you're up there on stage running around with 40 pounds of gear, running back and forth and jumping up in the air, and your body will betray you at some point,'" he explained.

In a 2013 interview with the Los Angeles Times, Stanley said that performing live with KISS was "like doing a triathlon with a guitar around my neck. You have to jump, sing, swing your arm and play the right chord. With that combination, anything can go wrong. I used to jump up in the air and land on my knees. It didn't hurt then, but it does now."

Stanley reiterated those sentiments in a 2014 interview with The New York Times. He said: "Things that didn't hurt me 40 years ago hurt me today. From 40 years ago. I've had both my rotator cups repaired, my knees. I've had a hip replacement. But I'm doing splits and everything on stage. I'm blessed. Every time I go out on stage, it is exhilarating."

Stanley, who had his first hip replacement at age 52, told U.K.'s Independent that he had no regrets about the nightly strutting in his eight-inch heels. "Every scar on my body was proudly earned," he said. "There's nothing worse than looking back and wishing you had done things, but I did 'em all. That's how life is supposed to be lived."

Stanley, who grew up half-deaf and scarred with a deformed right ear, eventually had reconstructive surgery in 1982 to create an ear using a piece of his rib cage.

SHOULDER SURGERY TODAY! How many show related surgeries have I had?? I lost count at EIGHT!! Was it worth it?!? ABSOLUTELY! Judge the value of what of you have by what you sacrificed to achieve that goal. This was a joy-filled BARGAIN. pic.twitter.com/RTEsTeTF7g