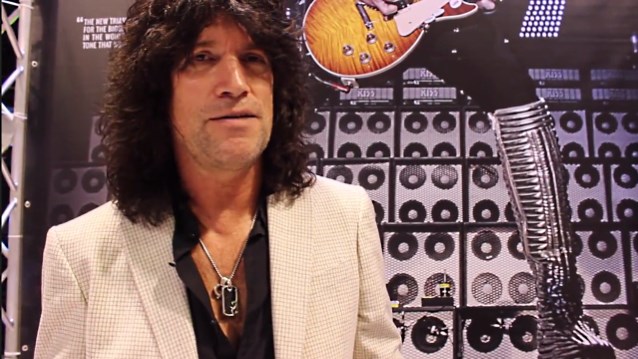 Music Junkie Press conducted an interview with KISS guitarist Tommy Thayer at the Hughes & Kettner booth at this year's NAMM show, which was held January 22-25 at the Anaheim Convention Center in Anaheim, California. You can now watch the chat below.

Speaking about how modern technology has affected the way musicians create music, Thayer said: "All the technology and even the social networking and everything that goes on, it gets a little overwhelming, and I think we sometimes do lose touch with getting back to the roots of music and the creative aspect of everything. I think we never wanna lose track of that or lose that connection, because with all the technology, even recording with Auto-Tune and all this stuff, you can make something sound perfect, but you lose the real personality and the soul of something when you do that too much. So it's something… You have to not lose track of that. Music is feel, it's soul… it's the heart."

Thayer joined KISS in February 2003, stepping into the boots Frehley had been occupying for the KISS reunion that lasted from 1996 to 2002.

Speaking about the first time he performed with KISS in full makeup, Thayer told Guitar World magazine in a 2013 interview: "The first time was at a private corporate concert in Jamaica in early 2002. It was exhilarating and over the top, but also very comfortable. It didn't seem that out of the ordinary. I had been around the band a long time, so I wasn't new to the family. I'd also played in a KISS tribute band in the early Nineties and we'd wear KISS makeup. Actually, I even used to put on KISS makeup as a kid. So it was more of a familiar feeling than not. It all came very naturally. But of course, you're filling big shoes because there's such a big legacy with KISS. There's high expectations and pressure to step up and do a great job."

He continued: "And yeah, some people say, 'Why didn't you come in and introduce a new character?' It's an interesting question, but when I got in the band I was just honored to be there. I also respected where they came from and what they're all about. So who am I to ever suggest I need a new personality or a new character, or the band needs a new guitar sound or style? That's ridiculous. Sometimes it just takes people a long time to understand that."