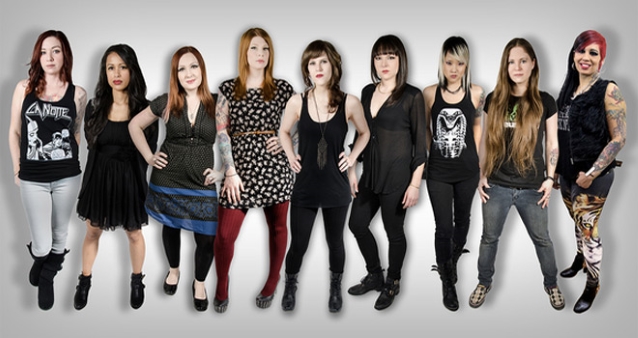 KITTIE will release a new concert film titled "Kittie: Live At The London Music Hall" on March 26. It features footage of the Canadian metal band's October 27, 2017 20th-anniversary hometown show at the London Music Hall in London, Ontario. The event, which also served as a screening of the long-in-the-making documentary "Kittie: Origins/Evolutions", saw KITTIE mainstays Morgan Lander (guitar, vocals) and Mercedes Lander (drums) take the stage with a number of their former bandmates to perform songs from the group's entire repertoire.

In addition to Morgan and Mercedes, the musicans that took the stage that night included:

The the final song, "Funeral For Yesterday", was played unplugged and dedicated former KITTIE bassist Trish Doan, who died earlier in 2017.

"I know we have people here from Germany and Australia, and all over," Morgan told the audience at the London show. "Tonight has been so special, and it really means so much to all of us. We have the best fans in the world."

A trailer for "Kittie: Live At The London Music Hall" is available below.

KITTIE was formed in 1996 by Mercedes and Morgan, lead guitarist Fallon Bowman and bassist Tanya Candler. Tanya left KITTIE soon after recording of its debut album, "Spit", which has sold more than 1.2 million copies. Bowman exited the group in 2001. Guitarist Tara McLeod and bass player Trish Doan joined the band in 2005. Although Doan left for health reasons in 2008, she returned three years later. Other musicians who have played with KITTIE during the years include Talena Atfield, Lisa Marx, Jennifer Arroyo and Ivana "Ivy" Vujic.