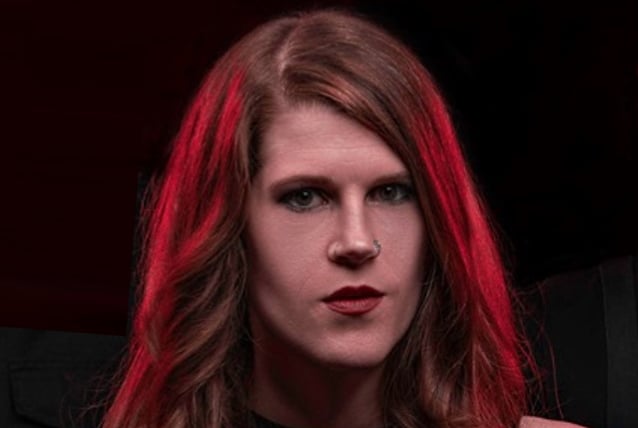 KITTIE vocalist/guitarist Morgan Lander spoke to the "Rock & Roll Beer Guy" podcast about her new project WINTERLVST, which she has been teasing in recent months. She said (hear audio below): "That, actually, is another project that I've been keeping very close — my heart's very close — because it's taken so long for this album to be finished. But it's a project with Justine Ethier, who's in KARKAOS and also was in BLACKGUARD, and Jonathan Lefrançois-Leduc, who runs a studio, Silver Wings Studio in Montreal, where BLACKGUARD recorded and whatnot. And WINTERLVST is something that the three of us have been working on probably — oh, geez — it's been at least five or six years. It just kind of started off with an idea to try something electronic and different, and we ended up doing an entire album. It's really dark, synthwave, very moody and kind of chill.

"That's an album that, because it is all very electronic and whatnot, I don't know much touring or shows that we could do, but it's something that is a passion project of mine and I've been working on for a long time," she explained. "It's completely, completely the least metal thing ever. [Laughs] It's something symphonic and cinematic, so there's a lot of strings as well, a lot of symphony stuff in there. Definitely lots of movie-type influences — like the music that would be in the background of any movie that you might [see and go], 'That's kind of interesting.' It's very emotionally evocative."

Last August, Lander joined the Quebec metal band KARKAOS. The group is working on its next full-length album, due later in the year.

KITTIE released a concert film titled "Kittie: Live At The London Music Hall" in March 2019. It features footage of the Canadian metal band's October 27, 2017 20th-anniversary hometown show at the London Music Hall in London, Ontario. The event, which also served as a screening of the long-in-the-making documentary "Kittie: Origins/Evolutions", saw KITTIE mainstays Morgan Lander (guitar, vocals) and Mercedes Lander (drums) take the stage with a number of their former bandmates to perform songs from the group's entire repertoire.

Wanted to share this clip of another new project I have been working on. WINTERLVST Coming summer 2020 pic.twitter.com/gic53l7vjK