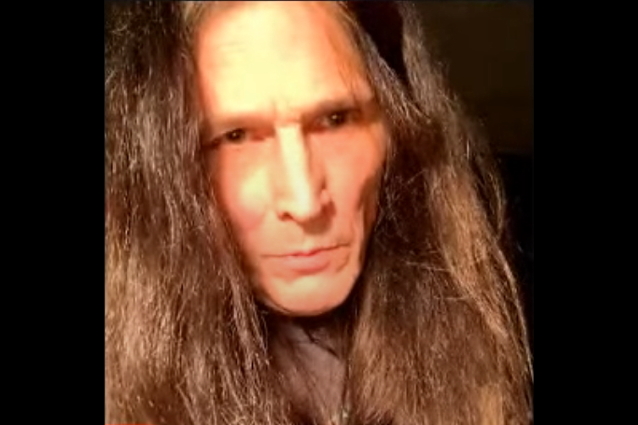 KIX Guitarist RONNIE YOUNKINS On His Battle With Alcoholism: 'This Is My Fifth Rehab I've Been To In 10 Years'

KIX guitarist Ronnie Younkins, who is unable to tour with the band because he has been placed under house arrest after repeatedly getting in trouble with the police, discussed his battle with alcoholism in a new interview with The Metal Summit. Asked about his current health status, he said (as transcribed by BLABBERMOUTH.NET): "I'm doing well. I'm an AA guy. I'm a 12-Step Program guy. I spent six months in a rehabilitation center, locked down. I went to court a few times; I had trouble with the law. And if that's what it took to get me where I'm at right now, that's what it took. It's been a long time coming.

"I was sober and clean for 21 years," he explained. "I was sober and clean when I was 32 and I stayed sober and clean — honest to God — all through my 30s [and] 40s up until I was 54. And prescription drugs — I was on a Hepatitis C treatment, the old kind — prescription drugs got me high. And quite a few other things were going on in my life at that time, and I relapsed. I went back out to hard drugs, then to alcohol. And for the last 10 years, I would go in to rehab for a month or two, come out and only get… The most I got [was] 71 days [sober] once. But that monkey was on my back pulling at me all the time. 'You can sneak another one. You can sneak another one.' It's always that first one that gets me drunk, high, whatever. It might not be that very first one, but it's gonna happen — it's gonna happen within two weeks, it's gonna happen in two months — it's gonna happen, and it always did. And it usually happened within three months where I ended up in handcuffs and hauled off to jail again.

"I say this only to help others recognize that if there is a problem. If you think you have a problem, like I have, and still do if I ever pick up again, my counselor tells me, 'If you do pick up, take your bottle. Don't call your family. Don't call anybody. Just go.' And that's it. Either die from drinking or end up in jail for the rest of your life. Those are the two options I have. Neither one am I gonna entertain by any means.

"I did everything that's been suggested to me with the 12-Step Program," Ronnie continued. "I thanked the judge for locking me down for six months, because I can drive by a liquor store now and I don't crave a drink. I'm very close to Baltimore where I used to go score hard drugs. I don't go there. I don't go to a liquor store. I know it's poison. I know it's gonna ruin my life.

"It's really affected everyone around me. That's the worst part of this disease… Other diseases don't cause bad behaviors; this one does. And for me, it progressed to the point… I went to one rehabilitation center when I was 32 and I [stayed clean and sober] for 21 years. The last 10 years have been so bad; this is my fifth rehab I've been to in 10 years. And I had to go to court quite a few times. I thanked him for locking me down with an ankle bracelet. I was monitored through the rehabilitation center for six months. And I couldn't even step up to the sidewalk out back. But in that, I kept hearing everything over and over and over and over again. Not to mention my counselor; I have a great counselor. And he's been monumental in my mental health and recovery, as well as everyone at the rehabilitation center I went to. I'm still connected with everyone there. Everyone that I live with here is connected with those people.

"On a daily basis, I do everything that I did at the rehab, and I still do it 24 hours a day," Younkins added. "When I get up in the morning, I start it all over again."

Ronnie is being temporarily replaced in KIX by Bob Paré, an accomplished musician who studied at the Music Institute in Los Angeles and taught music theory and guitar at several institutions, including Western Maryland College and Maryland Institute of Music.

Last month, KIX singer Steve Whiteman told Canada's The Metal Voice that "[Ronnie] was pretty much being supervised in a halfway house for about a year. And I believe he's finally got his freedom. So we're just kind of waiting to see how he continues to recover," he said. "Because it got ugly there for a while. And we wanna make that he's got his family life together, his own life together, before bringing him back into this temptation that's just around all the time. So we're all pulling for him. We're in touch with him. It's a waiting game at this point — just to make sure that, unsupervised, he's gonna be able to keep it together.

"I know the fans would love to have him back, and we would love to have him back, but it's gotta make sense for everybody," he continued. "And right now we've got the guy that had come in to help us out to replace Ronnie, Bob Paré, is just doing an amazing job, and I don't wanna rock the boat at this point to take a chance. So it's a wait-and-see game to see how he continues to recover and can he continue with his sobriety and get his life back together."

Last November, Whiteman addressed Younkins's condition in an interview with "The Chuck Shute Podcast". He said: "Last I spoke to [Ronnie], he's working, like, two normal jobs. He's still living in a rehabilitation clinic, and he still has a ways to go. Even when he's set free to go out into the world, like he did before, we still have to make sure that he's gonna be able to stay clean and sober. But right now he seems like he's doing really well. He's following all the rules and he's doing everything he can to get his life back in order."

Steve went on to say that Ronnie was sober for 20 years before relapsing and spiraling back down into addiction.

"He got Hep C, and he had to use intravenous needles to battle the Hep C, before the newer treatment came out," Whiteman said. "And we all think that that just kind of took his mentality back to the days when he was using. I mean, that's speculation, and you'd probably have to ask him that, but it seems like that's when things flipped for him."

Whiteman previously discussed Younkins's battle with addiction in a June 2021 interview with Sonic Perspectives. At the time, he said: "It's been an up-and-down adventure with Ronnie over the past five or six years. Sometimes he doesn't show up to gigs, and Brian Forsythe has to take over and play all the parts. Then he comes back for several months and does really well, only to fall off the wagon or get in trouble with the police. This last time, he got into trouble with the police and is currently in a halfway house under house arrest. That's the biggest reason he is not out with us now. We were looking at Bob Paré a couple of years ago when Ronnie was going through a bad stretch, but Ronnie bounced back. When he shows up, he does great, so we didn't make the move back then. This time we were forced to."

Whiteman clarified: "I'm not saying that Ronnie is out of the band. We are just saying [he is not gonna tour with us] until he gets it together [and] his family and these people that are helping him say he is good to go. We are not going to bring him in until he is ready. He has shown in the past he can't be sober on the road. Being out there in a rock and roll band is a very bad environment."

He added: "We have a long history of 40 years together. You want to give him the benefit that he is going to recover and do well. There have been so many times over the last five or six years [when] we didn't know if he was going to make it."

Younkins missed a KIX concert in Pennsylvania in March 2017 when the rest of the group was unable to reach him. He was eventually found "not in great condition and very upset," according to TMZ. A month later, his bandmates revealed that he was "headed to a rehab facility" and promised that his spot in KIX would be "waiting for him" once he was ready to resume playing with the group.

While Younkins was in rehab, he took time out to join his KIX bandmates for a performance in June 2017 at the Sweden Rock Festival.

Drug and alcohol rehab statistics show that the percentage of people who will relapse after rehab and even a period of some recovery ranges from 50% to 90%.

Most people do not manage to quit their addiction with their first attempt. They may try and fail a number of times before they manage to secure lasting sobriety.

For addicts that fall back into drug use, there is no guarantee that they will ever be able to stop again; their relapse may turn out to be a death sentence.

Over time, the life of the addict tends to deteriorate. This means that when people relapse, they may be going back to a life that is even worse than before.

Bob was a session musician for several independent label releases, and has spent most of his long career performing live in the Maryland and Washington, D.C. area with various bands, including FORCER, EVER RISE, PROJECT: EUPHORIA and, most recently, the RUSH tribute band SUN DOGS with KIX bassist Mark Schenker.