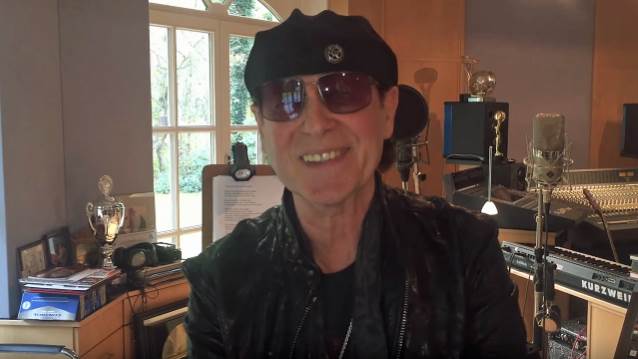 SCORPIONS vocalist Klaus Meine was recently interviewed by Australia's Heavy magazine. The full conversation can be streamed below. A few excerpts follow (as transcribed by BLABBERMOUTH.NET):

On the band's upcoming Australian tour with DEF LEPPARD:

Klaus: "When they were young, when they played America for the first time, their management back then — Peter Mensch, Cliff Burnstein — they put them on tour opening up for SCORPIONS in America in the early '80s. This is before they really started breaking big-time, so we know them from way, way back from the early days. [Since then,] we shared the stage a couple of places, festivals, all over the years here and then, but we never really did a tour together. This goes all the way back to the early '80s. We're really excited about it, and this time, they opened up for us back then, and now we're special guests to them."

On whether it will be hard to condense the usual length of their concert sets:

Klaus: "We have to figure out — it's probably got to be a 70-minute kind of set, so it's not the full headline show. We really have to find a good way to just find the right songs and the right dynamic to make it work and give our fans a good chance to see the best of this band, all the decades, all the big classics, the big hits. You have to find the right dynamic in a shorter set and make it work, but it will be the best of, the essence of, the DNA of what the SCORPIONS are all about."

On the group's longevity:

Klaus: "I think it's the fact that the band's been always based on friendship. The chemistry of this band has been always a very important part of it, and it was always about teamwork. Being a German band, we had a different kind of start, to go take our music all over Europe and then all over the world. There are not too many German bands who really broke worldwide, so it's a very unique story about the SCORPIONS, but it has been always built on friendship and on teamwork. You can see it now after all these years. The passion is still there for what we're doing, and [we're] still excited to work hard and rock hard and win those fans over."

On the difficulty of breaking out of Germany:

Klaus: "It was difficult in times without social media, without Facebook and YouTube and all of that, but there was a stage everywhere, and even if it was a small stage [or] it was a small audience, we were always ready to go out and play live in front of rock fans. In '77-'78, we went to Japan the first time, and then it was just a small step to go to America, and we became a part of the international rock family. But for a German band where English is not your mother language, it was not easy, but we felt this was our way — this was the way we wanted to go. By the time we came to America to share the stage with Ted Nugent, AC/DC, AEROSMITH, VAN HALEN, all these bands, that was a tough competition. It was not easy, but it make this band very strong at the same time."

On his memories of recording "Wind Of Change":

Klaus: "There was a special feeling around it. First of all, because it was so different, with the whistle opening and all that. I remember that I was pretty nervous when I presented it for the very first time to Rudolf [Schenker] and Mattias [Jabs] to get, like, the first feedback, but they liked it. Of course, nobody really knew that the song would be such a worldwide hit, not to [mention] the dimension because of the reunification in Germany and the end of the Cold War and all that. It was a different song, and I felt very strong and I felt good about it, because it just reflected what we were going through between '88 and '89 in the Soviet Union, and being a German band, it was all about, like, 'Here we are — this time, the Germans are coming with guitars.' It was very emotional, so therefore, this song was very special for me from the moment I wrote it, but it was a long way until it was recorded. I think it was the third single that was released out of 'Crazy World', and of course, it became a big hit. To this day, wherever we go, people sing the words. Just recently when we played in Mexico, it's like everybody's singing, and it's hard to figure out my voice because the audience is so loud."

On whether the group has started working on any new material:

Klaus: "In the last couple of years, we've been constantly touring, and there's really little time to go into the studio. But, of course — with Mikkey Dee in the band, [it] gives us a whole new shot of energy, and he goes, 'Come on, guys — we've got to go into the studio and write a couple of new songs.' 2018, we're pretty much booked until the end of the year, but let's see what the future will bring. It's always great to go back into a state of creativity and go back to the studio, and hopefully there will be a time next year where we do this."

SCORPIONS will perform a handful of American shows with QUEENSRŸCHE in August and September. They mark the group's first U.S. shows since the band canceled the final five dates of its fall 2017 tour due to Meine's "severe laryngitis."