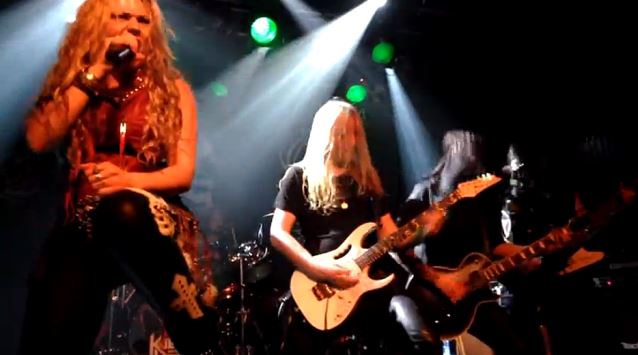 KOBRA AND THE LOTUS: Performance Footage Of New Song 'Warhorse'

Fan-filmed video footage of Calgary, Alberta, Canada-based metallers KOBRA AND THE LOTUS performing a brand new song, "Warhorse", on October 25 at 013 in Tilburg, The Netherlands can be seen below.

In a recent interview with Full Throttle Rock, KOBRA AND THE LOTUS vocalist Brittany Paige stated about the band's upcoming album: "Oh, I am so excited. The end of January (2014) is [when we plan to release the CD] and I do not see any reason why it won't be because we have almost fully wrapped it. We are back in the studio, there are just final little cleanups now, so in the New Year there is going to be a new album.

"The new album is really interesting, because it is absolutely eclectic, but there is still consistency, but you almost cannot figure it out all the time why it is inconsistent because there are that many different things. I mean, there are a lot of different expressions on this album. You have a lot of really traditional, in-your-face metal, you know, just straight-up heavy metal songs, but then we have some things that steer more towards Nordic-sounding and maybe even Canadian, which I do not even know what that means, but it just sounds different. [laughs] It is different from our last album, which is crazy, because you try not to be different, you do not want to change you sound or anything, but every time you write new music, it all has to do with what is just pouring out of you at that time. There is even some more rock/metal thing that goes back to more close to the roots of KOBRA AND THE LOTUS, when we first started, which was in between rock and metal; there is a little bit of that in there, too. So it is interesting. It is very heavy still, but it is eclectic and I cannot wait. There are some songs that I am not sure what to tell you it is, because I do not know what the label would be for it. It is still metal, [but] I do not know what kind of metal. [laughs]"

Regarding KOBRA AND THE LOTUS' overall sound, Brittany said: "We are definitely a kind of metal that is traditional, I would say. We do have that vibe and some off that nostalgic sound, with the riffs and the vocal style, but we also bring our own twist. I would not say it is a rebirth of that kind of music, but rather just turning the music forward that was of that style, where it included people from all different types of genres who could enjoy this kind of metal, no matter what kind of metal or rock they listen to, just like [bands like IRON MAIDEN, DIO and ICED EARTH]. [A band] like IRON MAIDEN is a really wide umbrella for people in the metal world; it really brings everyone together."

Brittany also spoke about her classical training and her jump to singing metal. "Actually it is not a very big jump," she said. "When I was 15, I saw JUDAS PRIEST play, and I had stopped being classical by then, because it was not for me anymore, and when I saw JUDAS PRIEST and I saw [Rob] Halford, I knew there was a place for me, but it did not have to be completely operatic or classical to be in metal. I think that is the two genres of music, classical and metal, that are actually pretty strongly correlated more than we know."

She added: "There are definitely similarities [between singing classical and singing metal] and there are a lot of things that have helped me be a stronger singer. Like the utilization of your breath. Knowing breath techniques, I think, is very important so you can get the notes better, especially when you are holding a note forever, but you want there to be power behind it and know how to not strain your voice, you know. You do not want to strain it because you have only got one voice and if you blow that you are dead in the water, so I think those things really help around the technique of protecting your voice and getting the most out of it."