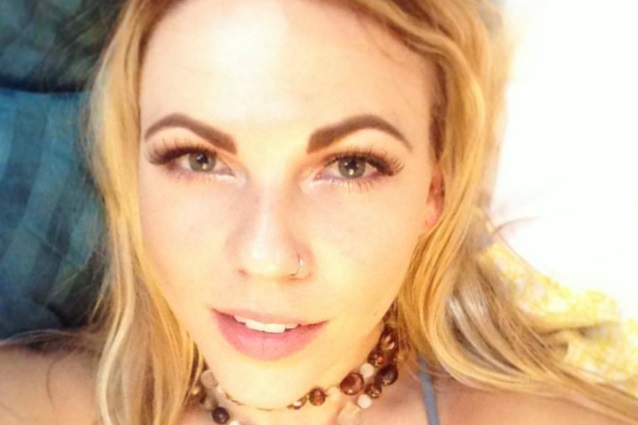 KOBRA AND THE LOTUS Singer Reveals Battle With Lyme Disease

KOBRA AND THE LOTUS vocalist Kobra Paige says that she has emerged victorious in her battle with Lyme disease.

The Calgary, Alberta, Canada-based singer revealed in a Facebook post that she was afflicted with the debilitating condition, and added that she spent several months last year receiving treatment while preparing to go on tour.

She wrote on Wednesday (February 7): "It's been a pretty challenging couple weeks, but amongst the transitions and obstacles, I received a really great gift yesterday. After the passing of our family dog, I was given the big A-ok that my battle with Lyme disease is coming to an end and I can officially, safely have children. For me, this is a dream come true.

"I think it's ironic that both 'Prevail' albums [from KOBRA AND THE LOTUS] were made when I was at my height in illness. I laid down on the studio floor all the time to rest. Had a chronic sore throat, fatigued to the core, muscles ripping from small movements, terrible joint pain, brain fog, you name it. Will power can push you through a lot.

"No one (including my band) but my family really knew what I was going through and I spent the following months after in a clinic, all alone, treating it aggressively before our fall tour.

"We still don't understand Lyme completely, but much of my family has been severely affected by it, and all we know is when you kill most of it, you start getting your life back. I was very lucky they supported me through the treatment.

"Next week I will finally be taking the IV port [used to administer antibiotics] out of my heart as I will no longer be needing it.

"Don't worry, the kids aren't happening soon, lots of rockin to do, but they will be a part of my future."

Lyme disease is a progressive bacterial infection that can be spread to humans by infected ticks. It's a disease that can't be seen, often causing dizziness, fatigue, and other invisible ailments.

About 300,000 Americans each year are diagnosed with Lyme disease.

Left untreated, the Lyme disease infection can spread to the joints, heart and nervous system.

KOBRA AND THE LOTUS's new album, "Prevail II", will be released on April 27 through Napalm Records. It is the second part of the band's opus magnum, and it will arrive one year after the successful release of "Prevail I".