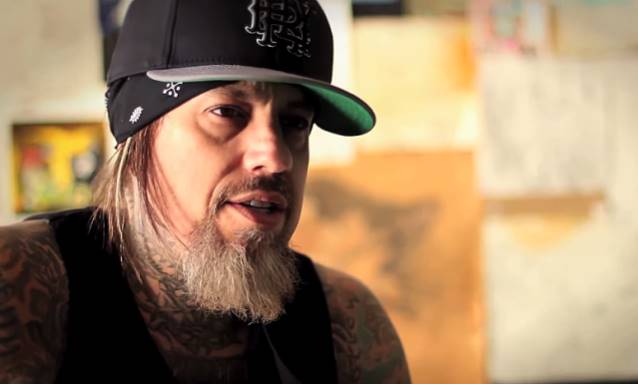 KORN bassist Reginald "Fieldy" Arvizu was interviewed on the June 22 edition of "The Louvau Show" on the 93.9 KWSS radio station in Scottsdale, Arizona. You can now listen to the chat using the SoundCloud widget below. (Note: The Fieldy interview begins around the 18-minute mark.)

Asked what former KORN drummer David Silveria's "beef" with Fieldy is and why Silveria is so "angry" with him, the bassist responded: "I'm not really sure, 'cause I'm not in the social-media, limelight-type deal, but I kind of hear it. And I don't really know what he's angry about. But any time, any interviews [that I do] or whatever, even to this day, I [say that I] still think he's a great drummer — I love his swagger and his style — and I don't have a problem with him. Even if he has a problem with me, I don't really have a problem with him."

He continued: "I think I wrote something in my book about back when we were maybe 20 years old, [David and I] almost got in a fight or something, and I think I worded it wrong in my book, the way I said it. And I would change it today.

"That's what happened. We tried to tell a story to help people, and then the other person, like, say, David, that read it, read it and took it wrong. And it's, like, that's not what I meant; I wasn't trying to blow him up.

"Even to this day, I wouldn't challenge him to a fight, because I don't really want to fight anybody; I'm not gonna do that, you know?!

"If I ever ran into him and he wanted to fight me, I'm, like, 'Go ahead and punch me, man. I'm just gonna stand there.'

"I don't wanna fight anybody. I'm 44 years old. I'm not a fighter. And if someone [like David] wants to punch me, knock yourself out, bro. I mean, I don't know."

Last December, a fan took to Silveria's Facebook as asked about a fight that he and Fieldy got into — which was cited in Fieldy's 2010 autobiography, "Got The Life". Silveria responded to the fan, saying, "Ha ha!! Fieldy NEVER threw down his bass and tried to fight me. He is a coward with a big mouth and he knows I would beat his ass like the little wimp that he is. I would love for him to talk shit to my face now. I would love to crush him like a bitch."

He continued, "Sorry, guys. Fieldy has acted like a tough guy for so long it's nice to tell the truth. Not only is he NOT a tough guy but he's a cowardly little bitch. He never tried to fight me 'cuz he knows I would squash him like a bug. He acted like a tough guy on tour to our staff 'cuz he knew he could get away with it because our crew got paid well and didn't want to lose their jobs. He used that to walk around acting like he thought he was a tough gangsta. Our entire crew laughed at him behind his back because they all knew he is a pussy. I would love to see him out somewhere with no security to protect the runt. He wouldn't say anything because he's totally scared of me."

Silveria also urged fans to share his comments anywhere that Fieldy may see it.

KORN singer Jonathan Davis ruled out the possibility of a reunion with Silveria, saying that the group's current incarnation is "perfect."

During an interview with U.K.'s Metal Hammer magazine, Davis was asked if there I any chance of Silveria coming back to the band. "No," he replied. "I don't wanna say any negative stuff, but where we're at right now is perfect and [current KORN drummer] Ray [Luzier] is an amazing drummer. He fits in good and doesn't have any typical drummer's complexes."

Silveria surfaced last year to answer fan questions on his Facebook page, during which he gave the current version of the group a little bit of a slam while emphasizing how important he was to the group's original sound and even how they came together. "I am a funky groove drummer and Ray is a heavy metal drummer," he said. "That's why KORN will never sound as unique as we used to . . . KORN lost their groove."

Silveria claimed he wasn't "talking crap" about his former group, but then went on to say, "Until they have the real 'funky drummer' it's just not gonna groove the way it could. I've made it clear that I would come back and restore the groove."

Davis told The Pulse Of Radio a while back that he believed Silveria lost his passion for music. "David was there to write beats but he wasn't really there," he said. "He really didn't like playing drums. The first two albums, I think, he really enjoyed playing drums and then after that he just lost his love for playing drums. It happens. Okay, good for him, he wanted to move on and do something else."