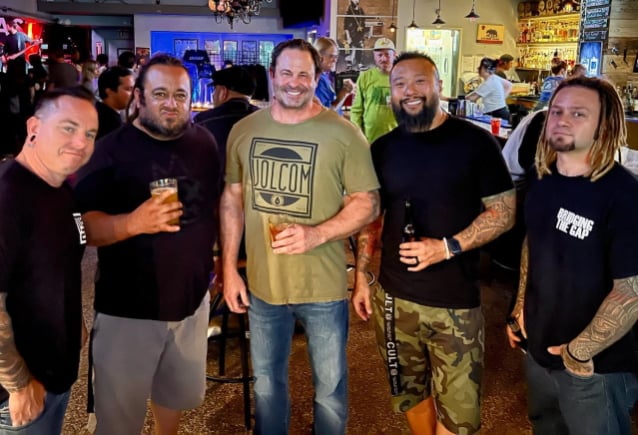 On Friday (June 24),the remaining members of BREAKING IN A SEQUENCE — bassist Chris Dorame, guitarists Joe Taback and Mike Martin and singer Rich Nguyen — released the following statement via social media: "David has made the tough decision to step down from the band to spend more time with his family. Words cannot describe what an honor it has been to play, write and share the stage with such an icon. Together, we created something to be proud of and in turn, rekindled the joy of playing just to play, in all of us. We wish our brother all the best in his future endeavors.

"Drum tracks for the next EP have been completed and David has given us his blessing to move forward without him. In the interim, we will continue production on EP3 and work to ramp up David's replacement.

"Thank you to everyone who has listened and supported us over the years.

"Let's give it up for Mr. David Silveria!"

BREAKING IN A SEQUENCE's latest EP, "Defy The Algorithm", was made available in April via all major platforms.

BREAKING IN A SEQUENCE formed after a worldwide vocalist search led them to recruit Nguyen.

BREAKING IN A SEQUENCE's debut singles "Pity" and "Change Your Mind", released on January 4, 2019, were met with tremendous fanfare. "Pity", the edgier track of the two, helped grow the band's following exponentially in both the U.S. and abroad. "Change Your Mind", showcased the band's softer, melodic side. The two singles were released as a Side A/B as a throwback to the '80s and '90s single releases.

BREAKING IN A SEQUENCE released its debut EP, "Acronym", in January of 2021.

Silveria previously told OC Weekly about BREAKING IN A SEQUENCE's musical approach: "We definitely have our own unique sound, but at times there are hints of the early sound of KORN. I feel this band is a new fresh sound on the rock scene that is lacking right now. We have a new sound for sure, but we aren't reinventing the wheel."