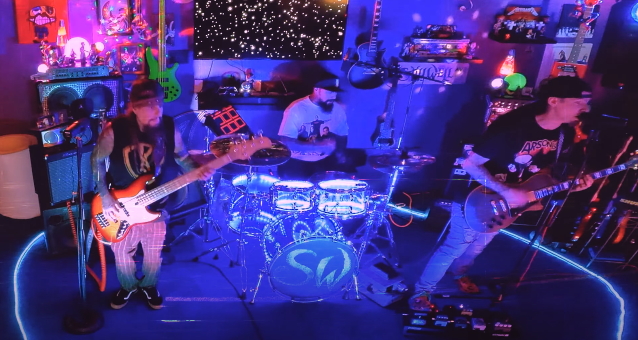 Last month, STILLWELL released the "Rock The House" title track with a music video that paid homage to BEASTIE BOYS. In September, STILLWELL dropped "Can't Stop Now", which marked the band's first new music since the release of STILLWELL's third album, 2020's "Supernatural Miracle". The follow-up to STILLWELL's past albums — "Raise It Up" (2015) and "Dirtbag" (2011) — was described in a press release as "the culmination of years' worth" of the individual members "finding their voice."

Also in September, Fieldy issued a statement saying that STILLWELL "has nothing to do with KORN". On September 6),he wrote on his social media: "Some clarity about STILLWELL. I've been doing STILLWELL for about 16 years, this isn't something new, although to some of you it is, that's cool. Along with my bros Wuv (POD) and Q (ARSONISTS, RADAMUS),we've put out 3 albums, we're about to drop our 4th.

Earlier in November 2021, Shaffer told "Loudwire Nights" host Toni Gonzalez about Fieldy: "Right now he's just taking some time to kinda figure out what makes him happy and figure out his happiness and what he wants to do with his life, I guess is the best way to put it. And make sure his mental health is at its best, because if your mental health isn't good, or you're not clear, you're gonna make bad choices.