KORN has canceled its previously announced May 13 appearance at Pointfest in St. Louis, Missouri. According to a post on the band's Facebook page, singer Jonathan Davis "has been given doctor's orders to rest his vocal cords, and is not able to perform on Saturday."

In a video message explaining the Pointfest cancelation, Davis said: "My voice is thrashed. I've had to cancel some shows. This stuff happens sometimes. There's nothing I can do about it. I need to rest up and get my voice back in good singing shape. I'll be out there rocking you guys hopefully next weekend at Rock On The Range. Again, my apologies, I'm sorry for everything, but sometimes this stuff just happens."

KORN recently postponed more than half a dozen headlining tour dates that the band was set to play this month due to what the band called in a statement "unforeseen circumstances."

The band just returned from a short run of shows in South America on which METALLICA bassist Robert Trujillo's 12-year-old son Tye played bass. Tye was filling in for KORN's regular bassist, Reginald "Fieldy" Arvizu, who was unable to make the tour due to what the group also called "unforeseen circumstances."

It is not clear at this point if the newly postponed dates are also connected to why Arvizu missed the South American tour.

KORN's summer trek with STONE SOUR is set to get underway on June 16 in Salt Lake City.

We regret to announce that we will not be performing at Pointfest this weekend. Jonathan has been given doctor's orders to rest his vocal cords, and is not able to perform on Saturday. We're sorry we can't be there with you and for you, and appreciate your understanding. 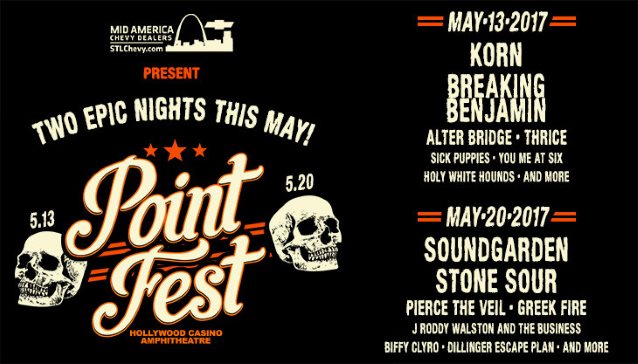