KORN, ASKING ALEXANDRIA, Devin Townsend, SABATON and KATATONIA are among the artists featured on "Decades Of Destruction", a compilation of covers which will be included with the 30th-anniversary issue of U.K.'s Metal Hammer magazine.

Set to hit U.K. newsstands on September 13, "Decades Of Destruction" will feature the following songs:

KORN's version of FAITH NO MORE's "We Care A Lot" was originally planned to be included on a full album of covers, which was said to be in the works more than a decade ago. Other tracks the band reportedly recorded included NINE INCH NAILS' "Head Like A Hole", PSYCHEDELIC FURS' "Love My Way", PUBLIC ENEMY's "Fight The Power" and CAMEO's "Word Up".

KORN's new album, "The Serenity Of Suffering", will be released on October 21. The follow-up to 2013's "The Paradigm Shift" was helmed by Grammy Award-winning producer Nick Raskulinecz, who has previously worked with FOO FIGHTERS, DEFTONES, MASTODON and RUSH, among others. The CD features a guest appearance by SLIPKNOT frontman Corey Taylor on the song "A Different World".

"The Serenity Of Suffering" marks the band's return to Roadrunner, which previously released 2010's "Korn III - Remember Who You Are" and 2011's "The Path Of Totality". 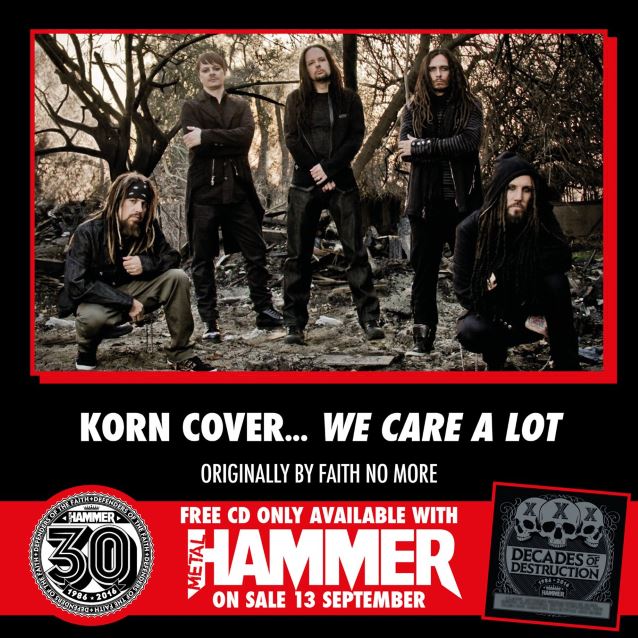