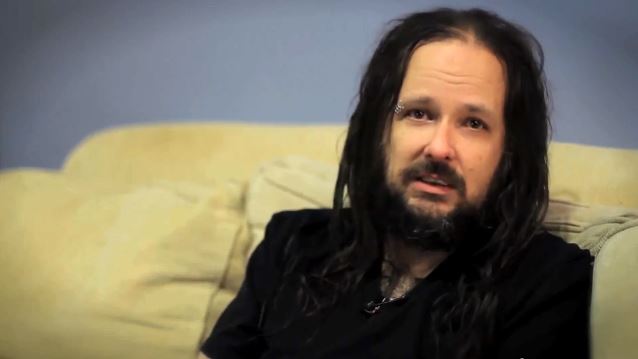 KORN's new song "So Unfair", which was inspired by frontman Jonathan Davis' youngest child, Zeppelin's battle with Type 1 diabetes, can be unlocked by going to this location and contributing to JDRF (formerly known as the Juvenile Diabetes Research Foundation),a major charitable 501(c)(3) organization dedicated to funding type 1 diabetes research.

Says Davis: "I want to support this wonderful organization that is fighting tooth and nail to help these little kids out. It's a horrible disease and I hate seeing kids in pain.

"Your gift will help JDRF to create a world without Type 1 Diabetes.

"Everyone who contributes to this campaign will receive our new song, 'So Unfair'. I'm also going to invite one lucky contributor and a friend to our private recording studio to create and record a song with me.

"Good luck and see you in the studio!"

Beyond the dietary changes and other lifestyle accommodations, Jonathan's son's struggle has prompted the singer and his wife Deven to become deeply involved in raising funds for research.

"I was out on the road. My wife was calling me, saying Zeppy was really tired and just being lethargic and laying around, and something was wrong. I got home from tour, and we took him to the hospital and told them what was going on. And they started running tests and doing all these things, and they decided to check his blood sugar, just to see. I think he was, at that time, 290. And so that set off a flag for Type 1 diabetes. His glucose was high. And when that happened, that changed my life forever. I found out my son had Type 1 diabetes."

"It's a horrible disease and I really wanna do whatever I can do to make a difference to help find a cure for this. 'Cause it just doesn't affect my son. I feel for everyone who has this disease. It's not fair at all. And so I started writing this song, 'So Unfair', about it. Because you're asking a child not to eat candy. I've gotta watch his carbs, I've gotta watch the sugar count, I've gotta watch everything. And how do you tell a child, 'You can't eat this. You can't do this. You can't do that.' So it's been a constant battle with me. I constantly worry about… At night, I've had him… his blood sugar drop really low where it'd scare where he won't look up. It's a very difficult thing to deal with. But there's one thing that keeps me going. I have a support group, which is my family, JDRF. They give me hope. They're searching for a cure constantly. I have hope that they're working on an artificial pancreas. I've been reading a lot about that."

Jonathan added: "Now [Zeppelin is] seven years old and he won't do the pump; he doesn't wanna use a pump. For me, it would be a lot better for him to use the pump, because he only has to get stuck one time every two days, but right now I'm sticking him about ten times a day, between finger checks and actual shots.

"He's a little boy, so when we got to sleep at night, he'll wake up in the middle of the night and try to sneak food and he'll wake up with high glucose in the morning.

"There's all kinds of challenges that I'm facing.

"Bottom line, I really wanna try and do something to help find a cure for this disease. And that's the bottom line. And I just wanted to express my frustration and my feelings in writing that song, 'So Unfair', and I wanted to put it out there and give all the proceeds to JDRF, so they can find a cure for this bullshit. And I'm just gonna say it, it's fucked up, and I want it to be gone. I don't want no one to suffer from this.

"If you can, buy the song, 'cause I want all the proceeds to go to this wonderful foundation that is fighting tooth and nail to help these little kids out.

"I hate seeing kids in pain; it just kills me. So buy the song. Let's find a cure for this bullshit, please."