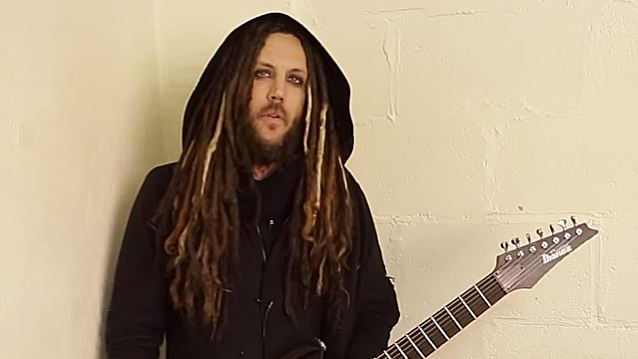 KORN's BRIAN 'HEAD' WELCH: Me And My Guitar

U.K.'s Total Guitar magazine met up with KORN guitarist Brian "Head" Welch in Cardiff, ahead of the band's show with SLIPKNOT, to find out more about his latest Ibanez signature model, launched at this year's NAMM show in Anaheim, California. Check out the clip below.

Welch pursued a solo career for several years before rejoining KORN onstage in 2012 at a festival. He reunited with the group permanently in 2013 and recorded his first album with them in 10 years, "The Paradigm Shift".

Welch is putting the finishing touches on his fourth book, tentatively due later this year. "The working title is 'With My Eyes Open', and it's about the eight years that I was away from KORN [between 2005 and 2013] to the road back to KORN," he said. "And it's crazy. I'm telling you… I found spirituality and I did have encounters with Christ, but I [spent time] around some wacky people too. And I went through some crazy stuff with, like, court cases, lawsuits… all this crazy stuff, man. So I'm writing about all that…"