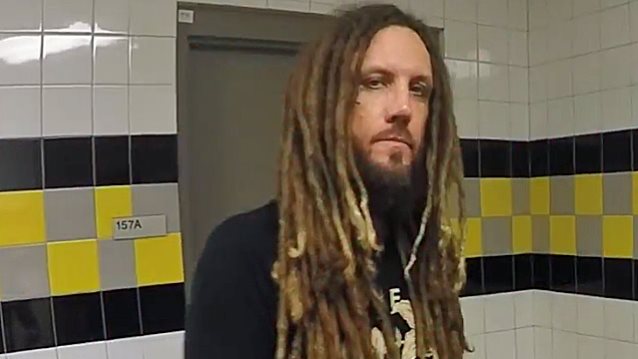 The 52-year-old Cornell was pronounced dead early Thursday morning after being found unresponsive in his Detroit hotel room on Wednesday night. The band had played a concert at the Fox Theatre earlier that evening.

A full autopsy and results of toxicology tests are pending, although Cornell's wife has said he may have taken more of an anti-anxiety drug than he was prescribed. His family issued a statement Friday questioning whether his death by hanging was intentional and if "substances contributed to his demise."

Speaking to the Z93 radio station at last weekend's Rock On The Range festival in Columbus, Ohio, Welch stated about Cornell's passing (see video below): "I've struggled with suicidal thoughts, I've struggled with depression for years, and so it just hit me hard and I can't shake it, thinking about it and his kids."

He continued: "I was talking to [fellow KORN guitarist] Munky earlier, and we have to communicate, man. We have to talk to people — to family or stranger or whatever, whoever, hotline, whatever we have to. 'Cause we all have to fight through this life, and it sucks sometimes to live — sometimes it's not easy."

Welch also acknowledged that Cornell's death affected him even more deeply because of his own battles with depression and suicidal thoughts.

"I think all of us in KORN, to some degree, have struggled with those kinds of things — at least depression," he explained.

"I never met any of the guys in SOUNDGARDEN, but the other guys in the band have," he added. "And our management is close with some people that really… like, ALICE IN CHAINS and stuff like that. It' just so close to home. But we're gonna honor him, we're gonna look to the future and we're gonna celebrate him and make some positive out of it."

The private funeral for Cornell will be held on Friday, May 26 at Hollywood Forever Cemetery in Los Angeles, California.

Ahead of Friday's service, Cornell's remains were cremated yesterday (Tuesday, May 23),as a small group of family and friends stood by, including his brother Peter, his wife Vicky, and his friends Linda Ramone and singer J.D. King, according to TMZ.

After 3 p.m. local time on Friday — following the private ceremony — the public is welcome to visit the gravesite, Cornell's attorney told Variety.

Chris is survived by Vicky and three children, a daughter named Toni, a son named Christopher and a daughter named Lillian from his previous marriage to former SOUNDGARDEN manager Susan Silver.