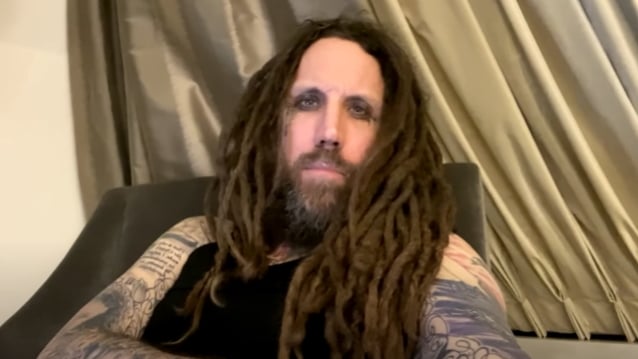 KORN's BRIAN 'HEAD' WELCH On 'Untouchables' Album: 'It's Not My Favorite'

In an interview with Rock Sound conducted at last weekend's Download festival in the United Kingdom, KORN guitarist Brian "Head" Welch reflected on the band's "Untouchables" album, which celebrated its 20th anniversary on June 11. Produced by Michael Beinhorn, the LP debuted at No. 2 on the Billboard 200 and featured the Grammy-winning single "Here To Stay".

"It's not my favorite [KORN album]," Welch admitted (as transcribed by BLABBERMOUTH.NET). "I like the record a lot — I think it's really good — but I love 'Here To Stay'. That opening, that riff, those guitar tones we got, you can't match 'em — it's ours forever; it's our sound forever. But yeah, that song hit hard. But the record was kind of challenging. I attempted sobriety that record. And we actually went to Arizona and got all these mansions and started recording and writing in these houses. And most of 'em were party houses. And I'm trying to get sober. And we spent so much money on that record. But it came out good. And we got some great memories."

Three years ago, Beinhorn told the "BREWtally Speaking" podcast about the making of "Untouchables": "I realized at a certain point that the costs were just spiraling way out of control, and there are aspects about it that couldn't really have been reined in at that point. Because even before I got started, the band tacked a million dollars' worth of expenses — their own expenses — on to the production costs. Which, essentially, I had to accept that contractually if I wanted to work on the project. So already I was coming in a million dollars short, and when the smoke cleared, I think the production budget was up around a million seven [hundred thousand] or something like that, [which] even in the best of circumstances would be an exorbitant amount to spend on a record, but I think the final cost for the record was 3.4 or 3.2 million, and all the rest of that were band expenses. I don't know exactly what a lot of that money got spent on, because I was never actually permitted to see any of the expense documentation or accounting."

Beinhorn admitted that the prospect of spending so much money on one album was "definitely a bit hair raising but at the same time exhilarating, because we basically had a blank check to do whatever we wanted. And having those kinds of resources, especially for a band who, at that point, really didn't have a clear idea of what their direction was going to be, it did wind up helping," he said. "I don't think that we could've done the record — that same record — in a shorter amount of time. It just wouldn't have worked out. There were so many layers to get through. For one thing, the band, just being in California, had so many distractions. They are extremely talented, but they also have the most incredible case of collective ADHD I've ever seen. So it wasn't easy keeping them focused. Obviously, once we got into a recording studio, things went pretty well. But trying to work with them in the pre-production and the songwriting phase was difficult — it was a lot of hard work."

Despite the fact that the production process took longer than originally expected and was more difficult than he initially anticipated, Michael looks back fondly on the final result.

"They were one of the biggest bands in the world," he said. "They could have anything that they wanted. They could spend as much money as [they wanted]. They had access to whatever they could possibly imagine or think that they needed at that point. So I think they were pretty pampered as well. So if we were gonna get anything extraordinary out of them, it was gonna take a tremendous amount of effort. But, fortunately, they gave a hundred percent. So I think it worked itself out."

In a 2018 interview with the "Lead Singer Syndrome" podcast, KORN frontman Jonathan Davis said that "Untouchables" was "hands down" his favorite album from the band. "It was a record that we made that couldn't be made in this day — we spent over four million bucks doing that," he explained. "Most of that money went to keeping our entire crew on retainer for two and a half years. That was just mistake number one, but we spent two and a half years working with an amazing producer, Michael Beinhorn, recording in different studios... That album is perfect. I call it the heavy-metal 'Aja' [STEELY DAN's 1977 album]. Sonically, you hear 'Aja' from STEELY DAN — that is a perfect record... It's just unreal how good ['Untouchables'] sounds and how much work we put into it."