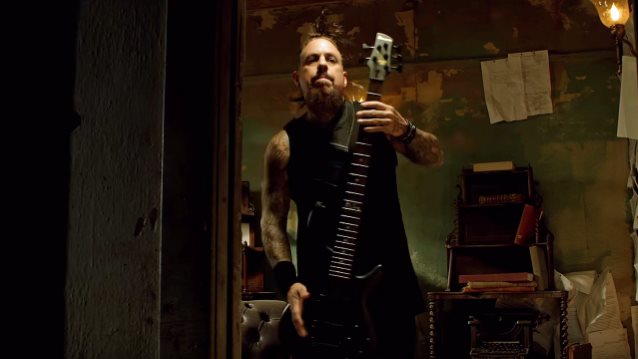 On July 27, Spirit 105.3 spoke to KORN bassist Reginald "Fieldy" Arvizu about his faith at a meet-and-greet at Auburn Volkswagen in Auburn, Washington. You can now watch the chat below.

Speaking about his encounter with Jesus Christ, Fieldy said: "First it happened to Head [KORN guitarist], my guitar player, and he happened to get saved and leave KORN. But it was a different situation, because he had a situation with his daughter where he had to be a full-time parent and he had to make this choice. And at the time, if that happened to me, I might have done the same, but I didn't have those problems. So when I did have my encounter with Jesus, it was… everything was fine. I mean, I was at my bottom, which I thought was bottom, but when I look back now, it wasn't bottom; it's just I didn't have a situation where I had to leave [the band]. So that's why I was kind of just stable where I was at. And I'm slower to decisions anyways, so I just kind of waited."

He continued: "It's a very mindblowing encounter when it happens; it's undeniable. It's completely so real that it almost will knock you on your back for a year before you realize, 'Wow! This is really going on.' So, yeah, ten years later, every single day that goes by, it's just undeniable.

"I've heard friends of mine say before… They're, like, 'It's no big deal to become a Christian. All you've gotta do is change everything.' [Laughs] That's why I think people are afraid — because they think, 'Well, I'm not ready for that.' Well, you're never gonna be ready for that. Jesus says, 'Come as you are.' He wants to clean you up. That's why people get religion mixed up. 'Ah, I see you've become religious.' I'm, like, 'That's where you have it twisted. I'm not religious.' I had an encounter with Jesus, and I want a personal relationship. And that's the only difference, I find over the years, that people keep confusing."

Fieldy added: "I mean, the difference is, I would say, for myself, with my encounter with Christ, I'm easier to get along with [laughs], you know. I can love people better, so my band sees it as a better thing, not as a threatening thing. And I feel like so many people, they can actually accept Christ and push people away by being a little too self-righteous. People are, like, 'I don't want nothing to do with that guy.' Well, then you're not loving your neighbor and yourself. You've gotta love people right where they're at, and I try to do my best doing that.

"I'm the type of dude that… Being out here, it tends to be, in this type of music, you run into a lot of '666' and devil stuff and this and that, that I kind of go to these people, and every time I talk to 'em, it's almost the same story. I'm, all, talk to 'em, love on 'em, and I'll ask 'em about it, and they're, like… I'm, like, 'What does your dad do?' 'He's pastor.' 'Ohhh.' And it's almost the same story every time. And if you get to the root of what is really going on, and then you can put all of that aside and you can do some work from there. But those people are… It's almost the same story. So I guess that's where I kind of go into that area."

KORN guitarist Brian "Head" Welch left the band in 2005 after he converted to Christianity and got off drugs. He rejoined them for a handful of live performances in 2012 before officially becoming part of the lineup again in early 2013.