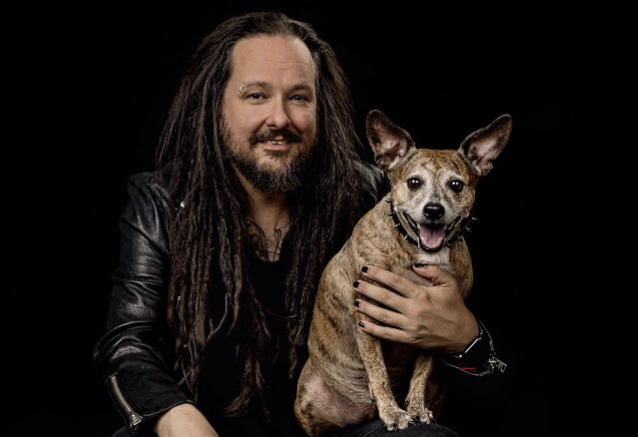 KORN's JONATHAN DAVIS Says He Is 'Deathly Allergic To Dogs'

KORN frontman Jonathan Davis spoke to Variety about his newly launched line of horror and rock-themed pet products bearing the name Freak On A Leash, one of his band's most popular songs. The products are presently only available at FreakOnALeash.com, with a portion of the proceeds going to the animal-rescue nonprofit Take Me Home.

Regarding how the idea for Freak On A Leash came about, Davis said: "It took shape about a year ago. Me and my girl Bee were talking about how much we love our animals and how cool would be to start a pet line of leashes and other dog and cat products, and she said, 'How funny would it be if we called it Freak On A Leash?' We went out and found a company to work with that wanted to do it, and the rest was history."

Jonathan went on to say that he is "deathly allergic to dogs." He explained: "I'm severely asthmatic, but I love them so much that I just deal. Occasionally I have to get my inhaler or my eyes are itching, but over time I get used to it and I can live with it. Anyway, I went on tour [earlier this year] and was really missing the animals. Bee said, 'We need a puppy' but I said, 'We've gotta be home so it's bonded to us.' So after the tour we found a place that had puppies and chose a Bantam poodle. His name is Dante and he's amazing — just a baby, so I'm really stoked. He brings so much life to the house — I just love the companionship with animals. I like them better than humans. [Laughs]"

Freak On A Leash merchandise was made available for the first time at the Take Me Home tent on October 8 at the Aftershock festival in Sacramento, California.

KORN's latest album, "Requiem", was released in February via Loma Vista Recordings. The band celebrated the LP's arrival with a special record-release event at the Hollywood United Methodist Church in Los Angeles, California.

KORN recently completed a summer tour with fellow rock culture icons EVANESCENCE, produced by Live Nation. Accompanied by special guests varying across select dates, the 18-city tour kicked off on August 16 at Ball Arena in Denver, Colorado, making stops across the U.S. in Boston, Chicago, Houston and more before wrapping up in Ridgefield, Washington on September 16.