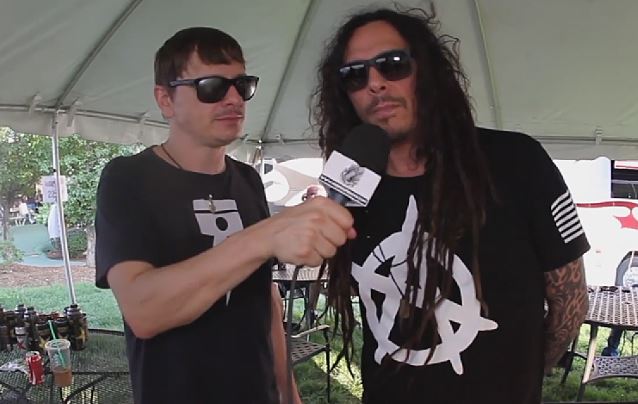 During a July 2014 interview with Jo Schüftan of Horns Up Rocks!, KORN guitarist James "Munky" Shaffer and drummer Ray Luzier were asked for their opinion on the possibility of a hypothetical PANTERA reunion featuring Zakk Wylde (BLACK LABEL SOCIETY, OZZY OSBOURNE) filling in for the late "Dimebag" Darrell Abbott on guitar.

"I would love to be a part of that show," Munky responded (see video below). "Yeah, that would be insane."

"Zakk, he'd be the perfect [guy to do it]," Ray added. "'Cause he… To this day, every time I talk to Zakk, he's always looking to the sky, he kisses the sky towards Dime. I don't think he ever got over it. He never, ever got over it."

"Maybe this is a good way for him to put some closure on it," Munky said. "It's an homage and also it's a good way to celebrate the life and the music [Dimebag] left us with. I think [there isn't] a better memorial than to kind of resurrect those songs. I'd be there in a fucking minute [if it happened]."

Former PANTERA and current HELLYEAH drummer Vinnie Paul Abbott was dismissive about the prospect of a PANTERA reunion when he spoke to Germany's EMP Rock Invasion earlier in the year. He said: "It's unfortunate that people go, 'Oh, wow, man, they can get Zakk Wylde to jump up there on stage and it's PANTERA again.' No, it's not, you know. It's not that simple. If Eddie Van Halen was to get shot in the head four times next week, would everybody be going, 'Hey, man, Zakk, go play for VAN HALEN. Just call it VAN HALEN.' You see what I'm saying? I mean, it's really selfish for people to think that, and it's stupid. It's not right at all."