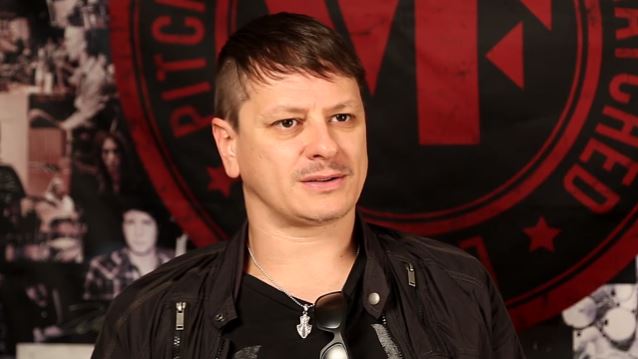 Cat With Hats spoke to KORN drummer Ray Luzier at the Vic Firth booth at this year's NAMM show in Anaheim, California. You can now watch the chat below.

Luzier is currently the drummer for the iconic nu metal band KORN. He is also well known for his work with David Lee Roth, KXM and ARMY OF ANYONE. Ray has also shared his wisdom as an instructor at the renowned Musicians Institute and with an instructional DVD released with the Hal Leonard Corporation.

"Going back to my days in high school, Vic Firth was the brand of sticks I most respected due to the unsurpassed quality that they offered," says Luzier. "My favorite two models were the 5B and Rock, so when I was able to design my own signature model, blending those two models was the way to go. It's the perfect stick for me."

The Ray Luzier signature model is a hickory stick designed with an oval wood tip, thick neck and short taper. Combining a 5B shaft with the tip and taper of a Rock, this stick can survive heavy back beats while still creating great sound and feel.

"Drumsticks are the tools we place in our hands and they must be perfect," Ray goes on to say. "I play hard in the bands that I work in, so I need a strong stick that will stand up to my style of playing while still feeling great in my hands. Give them a try. You'll see and hear what I mean."

KORN is working on material for a new album, tentatively due in the fall. A producer has already been selected for the effort but has not yet been announced.