AMON AMARTH frontman Johan Hegg explains: "The Jomsvikings were a shadowy and legendary sect of Viking mercenaries, as shrouded in myth now as they were when they fought across Europe and the Middle East. Ruthless and deadly warriors who fought for the highest bidder, their code was simple: Show no fear. Never retreat. Defend your brothers, and when called upon, avenge their deaths."

He continues: "I felt we were finally ready to use their story as the jumping off point for an AMON AMARTH album. The Jomsvikings and their world is the background for the story of a young man that is in love with a girl but unfortunately she's being married off. He accidentally kills a man when this happens and he has to flee — but he swears to have revenge and win her back. He can't let go of the past. He feels that he's been wronged and his life has been destroyed. The way the story evolves is not a happy story."

By far AMON AMARTH's most ambitious project to date, "Jomsviking" is available for pre-order in various formats now at AmonAmarth.com, where fans can also view the video for the album's first single, "First Kill". Produced by Grupa 13 and directed by Darek Szermanowicz (BEHEMOTH),"First Kill" was filmed in Gohrweide (Germany) and Warsaw (Poland) and features a cinematic depiction of the violent, brutal lyrics, along with powerful live footage of the band performing with their full dragon head and pyro stage set.

Adds Hegg: "'Deceiver Of The Gods' was very successful for us and we had a good run with that and did some really great tours. Even before we changed drummers for this record we had the idea to make a concept album. It was something we'd never done before and it gave us a challenge. I started writing the story, went into it wholeheartedly and once you start going down that path there's really no turning back."

Following "Jomsviking"'s release, AMON AMARTH will tour North America with fellow Swedes ENTOMBED A.D. and young USA metal upstarts EXMORTUS. For the first time, AMON AMARTH will be offering special VIP packages for the trek, which can be found here.

The BLABBERMOUTH.NET presale is available **FOR THESE DATES ONLY**:

Tickets go on sale to the general public on Friday, January 29 at AmonAmarth.com. 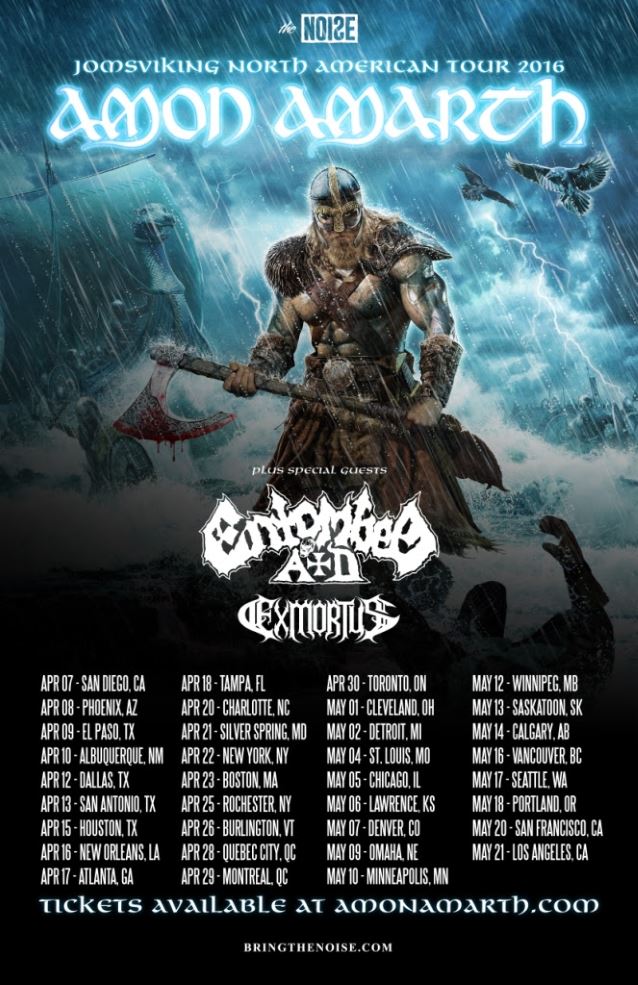