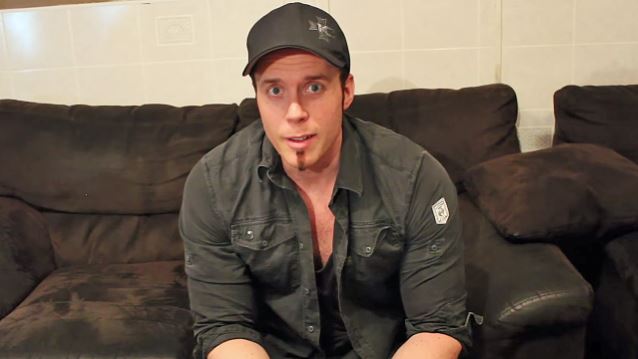 KAMELOT's TOMMY KAREVIK Wants To 'Convey All Feelings' Through His Music

The Age Of Metal conducted an interview with KAMELOT singer Tommy Karevik on May 16 in Tempe, Arizona. You can now watch the chat below. A couple of excerpts follow (transcribed by BLABBERMOUTH.NET).

On how the writing process for 2015's "Haven" was different from the making of 2012's "Silverthorn":

"Well, first of all, the first thing I did when I joined KAMELOT was to start working on 'Silverthorn'. And it was a little bit different, because I didn't really… It was the first thing we did, and I didn't have so much time to think about stuff; I just had to do stuff, and it turned out the way it turned out. Now, in hindsight, when I think back, it's… Is it two years between…? Two, three years between releases… I grew into the band more. I found my spot within the band, both when it comes to live, and also, obviously, in th studio — in the writing process. I got to know the guys better; the chemistry… everything's just better. I come from a musical point when I write, which is… I wanna convey all feelings. I don't wanna have an album just being melancholy; I wanna have the whole spectrum of emotions. You can pick up the album and you can be happy and listen to the happier side of the album and still be happy. The happy songs make you happy, or the sad songs if you feel… There's songs speaking for all emotions, I would say, which I really like as a listener. 'Cause our goal is to get people to listen from song one to the last song. I think you really can do that with this album, because it's a little bit of a roller coaster ride of emotions and moods. So I think we really succeeded in doing that."

On what makes KAMELOT's music so appealing to different kinds of metal fans:

"I wish I had a simple answer to that. I can just speak for myself. When I listen to music, I wanna hear something that touches me, that conveys some kind of emotion. I do know that that's what I aim for when I write music — whether it's a melody or lyrics or… I just try to convey some kind of emotion through the music. And if I don't, as a person, if I listen to some music and I don't get that emotion, that music's crap for me; I don't listen to that music. So I think that's what people hear when they hear KAMELOT — not only double bass, but there's also some layers… different layers of the music, which I [think] is kind of unique when it comes to harder music. So I think and I hope that is why people like it."

KAMELOT is currently on a massive world tour, with European festival appearances scheduled for the summer and a number of shows scheduled for September/October as part of the band's biggest European headlining tour to date. KAMELOT will then return to the road for the second leg of its North American tour in November and December.

"Haven" was made available on May 5 in North America and May 8 in the rest of the world (excluding Asia) via Napalm Records as part of an exclusive licensing deal through the band's Kamelot Music LLC.

Produced by Sascha Paeth and mastered by Jacob Hansen, "Haven" is a massive album that is sure to please critics and fans alike. Guest musicians on the CD include Alissa White-Gluz (ARCH ENEMY),Troy Donockley (NIGHTWISH) and Charlotte Wessels (DELAIN). The breathtaking cover and artwork was created by Stefan Heilemann and additional art/layout was done by Gustavo Sazes.